Jane Jordan - Sojourn Into the Supernatural 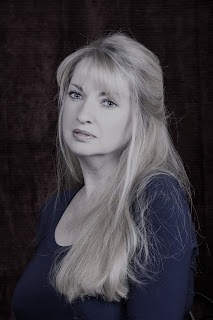 When Jane Jordan was a schoolgirl, she thought it took real inspiration to write a story. Although she enjoyed reading, her preferences leaned more toward art and biology. But her fascination with the supernatural was something  she couldn’t deny. “I believe growing up in England, a place full of strange folk tales, haunted castles and ancient graveyards gave me my first inspiration,” she recalls. Later, she had her own strange experiences and lived in a 500-year-old thatched cottage that she shared with the ghost of a cat. She also worked in a 1000-year-old castle that had its fair share of supernatural entities. These experiences would provide the inspiration she needed to become a writer.

Jordan was born in Essex, a town southeast of London. In 1992, her husband’s job necessitated a move to Michigan, a few years later she moved to Englewood in Florida. After nearly fifteen years in America, they returned to England, ans Jordan was surprised to find it difficult to adjust. “I’d become Americanized,” she explains. “I felt like a foreigner in England.” During this time, her interest in biology and love of gardening led her to study horticulture, and she eventually took a job as a horticulturist for a botanical garden in England. In 2013, she returned to the states, settling in Sarasota. Jordan kept busy gardening and helping her husband with his business. She also began writing articles for Florida Gardening Magazine. But a trip to England in 2004 was the catalyst that sent her life in a new direction.

Jordan and her husband had rented an ancient house in the town of Exmoor, and she became bewitched by the place. “Something happened that’s hard to explain,” she recalls. “We were driving down this narrow lane between high hedgerows when the road suddenly opened up and we were confronted by this magical house. There was something about it that captured my imagination. I fell in love with it.” Jordan began researching the house’s history and learned that Samuel Taylor Coleridge wrote his famous poem “Kubla Khan” there.   She also discovered that the house had some other-worldly residents. “The house had this haunted feeling about it,” she says. “On the first night, I was in the bedroom at the dressing table, and the closet door just opened behind me. A few other weird things happened. The caretaker told me that others had weird experiences there. All these things set my mind in motion and inspired me to write a haunted house story.” That story would become her first novel, Raven’s Deep – a dark romance that combines vampire lore with a modern love story.

Raven’s Deep spawned a gothic vampire trilogy. The second book, Blood and Ashes, takes the characters from Exmoor to London in a tale that Jordan calls “a mixture of love, revenge and horror.” The final book, A Memoir of Carl, tells the story of a man who, after being bitten by a vampire, allows the love of his life to believe he is dead rather than expose her to his true nature.

Jordan’s next book, The Beekeeper’s Daughter, actually started out as her second novel. “I began writing it years ago, but the other books got in the way,” she says. “When I got serious about writing, I wanted to write a witchcraft story set in a different time period.”  The Beekeeper’s Daughter tells the story of a young girl growing up on the English moors in the 1860s who, unbeknownst to her, possesses special powers inherited from her mother, a beautiful witch. “The witchcraft element was powerful and intriguing,” Jordan says. “Writing this book took me on a creative journey with lots of twists and turns.”

Jordan’s fifth novel, Whisht Hall, is set in a grand house on England’s beautiful and wild Dartmoor. “The moor is famously remote, filled with great granite outcrops, dense mists, and dangerous mires,” she says. “In Dartmoor, granite forms the uplands and the land is capped with many exposed granite hilltops known as tors.  It is a place of heather moorland, wooded valleys, and meandering rivers.” Dartmoor has also been an inspirational location for writers. Renowned for mysterious legends, it inspired Sir Arthur Conan Doyle to write his famous Hound of the Baskervilles. “It is not a stretch of the imagination to understand where he got the idea from,” Jordan says, “Dartmoor is home of the legendary Whisht Hounds, or the hounds from hell.”

Scheduled for publication in June, 2019, Whisht Hall is a multilayered thriller that spans twenty years and two continents. “I like to combine locations, in this case, entirely different countries, and construct a story around different cultures,” Jordan explains. “My other location in this book is New Orleans, seemingly a world apart from Dartmoor.  What I ended up with was a compelling story of the deep south, combined with the dangerous moors of Dartmoor, and a novel layered with betrayal, deception, and Voodoo.”

Jordan's latest project has been a collection of short stories. Titled Dark Matter, this is a collaboration with her daughter and award-winning illustrator, Sarasota artist, Charlotte Jordan. "Over the years, I'd written quite a collection of short stories," Jordan says. "It was an ambition in the back of my mind to showcase some of them, along with Charlotte's artistic skills." The stories in Dark Matter are inspired by horror, the supernatural and the macabre.  “I like to draw on real experiences in my work, and many of these stories have a thread of truth running through them,” Jordan says.

“Feeding the Pigs” is one example. It tells the tale of three brothers whose lives are bleak. They are ruled by the eldest, Charles, a vile and violent man who no longer cares for his hungry pigs. The sense of despair and horror is overcome when his brother, Jack, can no longer stand the life and confronts Charles, resulting in bloody retribution. The story was based on a real house Jordan visited in England. “The house was strangely atmospheric, as if something awful remained within the walls,” she recalls. “This feeling led me to ask questions of people in the village, and the story they told me, along with my own impression of the place, led to this dark tale.”

“The Witch of Old Cleeve” was also based on an account from a local who lived close to a small village in Somerset, England. Some of the villagers believed that an old woman who lived nearby was a witch who could turn people into animals. “This story sparked my imagination, and, along with the colorful dialogue that the Somerset characters have, I thought it made for an interesting short story,” Jordan explains.

Jordan finds many inspirations to draw upon in the old countries of the world, with their ancient castles and haunted mansions. But when she returned to Florida, she began researching old stories and haunted places in her home state. This research inspired her to write a few Florida ghost stories, two of which, “Shadowlands” and “The Conch House,” are included in Dark Matter.

Like many other people, Jordan enjoys horror stories and the thrill of the unknown, but only in a good way.  “Dark fiction can make you confront your deepest fears, it can play on your darkest childhood terrors,” she says. “It allows a reader entertainment on a similar level to what our Victorian ancestors got, when they attended weekly seances. The difference being, with literary horror, once you close the book you are safely back to reality.”


For more information, visit the author's website at www.janejordannovelist.com .