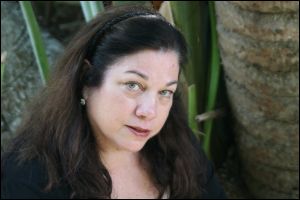 Carolina Garcia-Aguilera has always loved solving puzzles. As a child, she lost herself in the exploits of Sherlock Holmes, Nancy Drew, and the Hardy Boys. As an adult, she decided to pen some mysteries of her own.  Since she thought it was important to write what she knew, this mother of three became a licensed private investigator so that she could write from experience. Twenty-two years and nine novels later, Garcia-Aguilera is a prize-winning author and the head of her own PI firm.
Bloody Waters, Garcia-Aguilera’s debut novel, is the story of a couple searching for the birth mother of their adoptive daughter, a toddler suffering from a rare disease that requires a bone marrow transplant from her biological mother. Adoption is a subject that has always interested Garcia-Aguilera. “My best friend growing up was adopted. She never felt the need to find out about her birth parents, but when she turned twenty-one she received a manila envelope containing information about them. I was there when she opened it. She found out that she was actually Canadian. I thought about how strange that would feel, to discover you weren’t who you thought you were.”  The Miami Herald praised the Bloody Waters as “Fascinating…witty…compelling.”
Bloody Waters introduced Lupe Solano, a Cuban-born Miami PI with a penchant for Chanel bags, strong Cuban coffee,  and luxury cars. “Lupe is like the traditional male private eye in that she’s a loner and will do whatever she thinks will serve her client,” Garcia-Aguilera explains, “but I wanted her to be intelligent, fashionable, and fun.” Lupe’s exploits continued in Garcia-Aguilera’s next five novels, a series she describes as “fun page-turners that entertain and educate.” In addition to the mystery at the core of each story  is a subplot that involves an element of Cuban history, culture, or politics. “I don’t think the Cuban story has been told in a forthright manner,” Garcia-Aguilera says. “I wanted to instill a little about Cuban exile history.” She has a firsthand knowledge of the Cuban experience. Born in Havana to a family with deep roots in Cuban culture, Garcia-Aguilera immigrated to the US one year after the Cuban revolution.
When her contract for the Solano series ended, Garcia-Aguilera decided to change editors, agents, and genre. She penned two stand-alone novels: One Hot Summer, a book she describes as “a cynical love story about adultery” which was later featured as a Lifetime TV movie; and Luck of the Draw, a thriller set in Las Vegas.  Lupe Solano will return in Garcia-Aguilera’s next novel, Bloody Twist. In this seventh book of the series, Lupe is hired by an attorney  to aid in the defense of the highest-paid call girl in Miami Beach - a virgin (yes, you read that right!) who has been accused of murdering of three men. Bloody Twist has been completed and is awaiting publication.
When Garcia-Aguilera isn’t writing or working on a case, she enjoys reading, going to the gym, and baking “well-liquored cakes.” She is also determined to be “the only person on South Beach with an English garden.” But most of all, she wants to continue entertaining her readers with books that will inspire them to say, “She tells a good story!”
For more about Carolina Garcia Aguilera, visit her website at http://www.carolinagarciaaguilera.com/
Next: Tom Corcoran – Key West Chronicler
Posted by Jackie Minniti at 10:15 AM 3 comments: 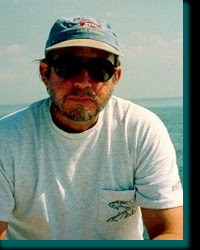 When James W. Hall stepped off the train from Kentucky in 1965 and took his first breath of Florida air, something magical happened, and he has been working to capture that magic in his writing ever since.  Hall is the award-winning author of short stories, essays, poetry, and sixteen bestselling crime novels. His writing has a lushness and lyricism that literally sing on the page and bespeak a writer who has an abiding respect for the beauty of language. He is also a master storyteller who keeps readers mesmerized with stories that are impossible to put down.
Hall entered Florida Presbyterian College (now Eckerd) planning to become a preacher.  Then he met Peter Meinke, the man who changed the course of his life. “It was Peter’s first year teaching at Florida Presbyterian,” Hall recalls. “He taught poetry, and I thought he was really cool so I took his classes.  That’s when I fell in love with literature. Peter became my role model.  He had an incredible influence on me.”
But Hall’s love affair with reading actually began long before that.  As a young boy growing up in , Hall remembers being dropped off at the town library while his mother went shopping.  When the librarian walked by, Hall grabbed a random book from the mystery shelf to make himself look busy.  He became hooked on the story and had “the extraordinary revelation that reading a book was fun.” Hall credits that unnamed mystery novel with setting him on the road to becoming a writer. According to Hall, “I started to picture the unspeakable – that I might someday learn the craft of writing well enough to create the very things I so dearly loved to consume,”
After graduating with a BA in literature, Hall went on to earn a Masters degree in creative writing from Johns Hopkins and a Ph.D in literature and creative writing from the University of Utah.  He took a teaching position as Professor of Literature and Writing at Florida International University where he has worked for over thirty years.
Hall published his first novel, Under Cover of Daylight, in 1988. The story introduces Thorn, the reclusive, reluctant hero who longs for a simple life hand-crafting fishing lures at his home in the .  Hall based his character on a Key Largo neighbor,  but admits that he’s thrown in some of himself as well. “Like Thorn, I’m withdrawn by instinct, but called into action by the real world,” he says. “When you write, you have the joy of disappearing into the world you’re creating.   But the downside is that it’s hard to disengage, and sometimes it causes you to neglect the real world of family and friends.”  Hall tries to counteract this by setting a schedule: writing in the mornings and afternoons and keeping evenings and weekends free.
Silencer, a book Publisher’s Weekly  describes as “Hall’s superlative eleventh thriller,” pits Thorn against two deviant contract killers as he attempts to keep an environmental treasure out of the hands of greedy developers.  Thorn finds himself pulled into a complex web of kidnapping, murder and family intrigue that leads back to the 1930s and a group of powerful men with a sinister plan.
While critics have been lavish in their praise of Silencer, Hall isn’t one to rest on his laurels.  He is already at work on another book, but he still manages to spend quality time with his wife Evelyn, his “first and best editor.” He also enjoys reading, hiking, fishing, tennis, traveling, watching movies, and walking his three Cavalier King Charles Spaniels, Carrie, Stella, and Maggie.
It’s been quite a journey from that long-ago Kentucky library, but along the way, James W. Hall has enriched the lives of countless readers all over the world.
For more about James W. Hall, visit his official website at http://www.jameswhall.com/
Next: Carolina Garcia-Aguilera - Mystery...Cuban Style
Posted by Jackie Minniti at 1:49 PM 2 comments: