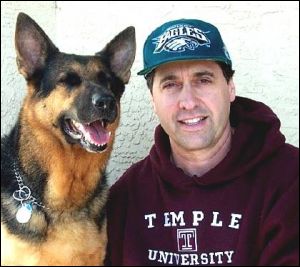 As a teenager growing up in Philadelphia, Steve Alten loved reading shark stories. He kept coming across references to something called “Megalodon,” the 70 foot, 70,000 lb. prehistoric relative of the great white shark. At the time, Alten had no way of knowing how “Meg” would someday change his life.
By 1995, Alten had moved his family to South Florida and taken a job as the general manager of a wholesale meat company. Unhappy with his work, he began dabbling in writing. After reading an article in Time magazine about the Mariana Trench (the deepest canyon in the Pacific Ocean), a storyline popped into his head. He decided to set it to paper, working on weekends and weeknights, and in eight months he had completed the manuscript for MEG: A Novel of Deep Terror. On Friday, September 13th, 1996, Steve lost his job. Four days later, MEG was sold to Bantam-Doubleday and went on to climb to #17 on the New York Times Bestseller List.
MEG tells the story of Jonas Taylor, a diver who encounters a Megalodon on a top-secret dive into the Mariana Trench. Even though no one will believe him, Taylor spends years researching the possibility that this creature could still exist in the ocean depths. In what the New York Post describes as “an adrenaline-pumping thriller,” Taylor once again encounters the deadliest creature to ever prowl the sea. The success of MEG paved the way for a  four-book series: The Trench, Primal Waters,and Hell’s Aquarium. In the latest, and what Alten considers the best of the series, Hell's Aquarium brings back not only Megalodon but many other prehistoric sea monsters for what Alten describes as “a final world wrestling match in the sea.”
In addition to the MEG books, Alten went on to publish several other well-researched, page-turning thrillers. Domain, and its sequel, Resurrection, are part of a series of novels which explore the Mayan Calendar’s prophecy about the end of the world. The most recent addition, Phobos, follows protagonist Immanuel Gabriel as he goes to the end of the world and back again to explore everything the Mayans knew and to show that the universe, and human existence, aren’t what they seem.
Alten has also penned three stand-alone novels: The Loch, Goliath, and The Shell Game. According to Alten, The Shell Game is the longest and most difficult book he’s ever written. A “cautionary tale” about the end of world oil, this controversial and disturbing novel took 2 ½ years to write. Alten spent over a year researching peak oil and its effects on society. This led him to the events of 9-11 and the idea of a government conspiracy. Alten hopes The Shell Game will get readers to “open their eyes and see that part of patriotism is questioning. Without questioning, you can lose your open society.”
The novel Alten considers his best is also his latest book. Grim Reaper: End of Days is the first in what Alten plans as a series that can be described as “The Stand meet Dante’s Inferno.” Set in New York, Grim Reaper takes readers on a classic hero’s journey of good versus evil and transformation versus redemption. Drawing parallels between the lack of morality in Europe in the days preceding the Black Death and the greed and corruption in today’s society, the story centers around a covert biological program that could lead to global pandemic and destruction.
Over the years, Alten had received countless letters from teenagers who said they hated reading until they read his books. When he learned that teachers were using his books in their classrooms, and MEG had been rated a #1 book for reluctant readers, he was inspired to create “Adopt-an-Author”, a nationwide non-profit designed to encourage students to read. Teachers who register for the free program receive giant shark posters, free curriculum materials, an interactive website, student-author correspondence, and classroom conference calls/visits with the author. To date, over 10,000 teachers have registered, and the program has had unprecedented success in getting students to read. (For more information about “Adopt-an-Author,” go to http://www.adoptanauthor.com/.)
Although Alten makes it a priority to be accessible to his readers, he finds the solitude of writing a challenge. “When you write, you’re on sort of an island with nobody there to help you. It’s all up to you – there’s no right or wrong decision,” he says. But judging from the success he’s enjoyed as an international bestselling author, becoming a writer was the right decision for Steve Alten.
For more about Steve Alten, visit his website at http://www.stevealten.com/
Next: Tracy A. Akers - Welcome to Aredyrah
Posted by Jackie Minniti at 11:23 AM No comments: