The Many Worlds of Jeffrey Wilson 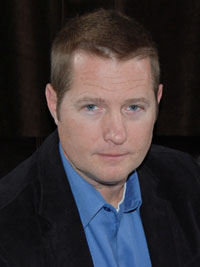 Jeffrey Wilson has had a window into many worlds. This Tampa writer has experienced life as a firefighter, paramedic, actor, jet pilot, diving instructor, naval officer, and Vascular and Trauma surgeon. He also served two tours in Iraq as a combat surgeon with the marines and a Joint Special Operations Task Force. He brings these experiences to his writing by creating unforgettable characters and placing them into weird worlds and fantastic situations. The result is an edge-of-your-seat reading experience that will keep readers riveted until the last page is turned.


“I’ve done everything on my eight-year-old wannabe list – other than being an astronaut,” Wilson says. “My mom attributes it to my short attention span.” His short attention span didn’t prevent him from earning a degree in biology from William and Mary College and a degree in medicine from Eastern Virginia Medical School. He does, however, say it’s the reason he started to write short stories. His first published work was a short story printed in his middle school’s magazine. As he continued writing, his stories won several fiction competitions.  “I always wanted to write a novel,” he admits, “but I didn’t think I had the attention for it.”


This all changed after 9/11 when Wilson was deployed to Iraq. “Being in a war zone consists of long hours of boredom broken up by short periods of excitement you can do without,” he explains. Wilson decided to fill those long hours by writing the story of a marine stationed in Fallujah who is shot in the chest and wakes up as biology teacher in Middle America. He then begins to have vivid dreams of Iraq that cause him to question whether his life or his dreams are the true reality.  What started as a short story gradually evolved into a book.  “I found novel writing liberating,” Wilson says. “It was actually easier to develop the characters and back story.”  The novel, Fade to Black, is scheduled for release on June 14, 2013. Wilson will be in New Orleans that day with his wife, signing copies of the book at the Stoker Weekend/World Horror Conference at the Hotel Monteleone and hosting a launch party later that night.


Wilson’s debut novel, The Traiteur’s Ring was released in 2011 and was actually the third book he had written. It is the story of Ben Morvant, a Navy seal who comes into possession of a mysterious ring that brings him visions of evil, pain and death. Forced to face a dark secret from his past, Ben realizes he is a soldier in a greater battle than he could have ever imagined. The Traiteur’s Ring was originally published as an e-book before being picked up by Journalstone Publishing as part of a three-book deal.


Wilson’s 2012 release, The Donors, is a fantasy horror novel set in a modern-day hospital. The story centers around Nathan Doren, an abused five-year-old, and Jason Gelman, the doctor who cares for him. The two must face demonic creatures who stalk the hospital halls, feeding on the fear they create in their victims. According to Wilson, “The whole idea of demons harvesting fear from bad people came first. Making a child the hero came later.” Wilson admits that writing in Nathan’s point of view was a challenge, but having his own five-year-old son was a huge help. “Being a dad,” he says, “I could relate to how a kid’s brain works.” The West Orlando News called the novel “a very professionally written tale of nail-biting, chilling horror." The Donors has also been featured on National Public Radio.


Wilson has recently finished his fourth novel, Julian’s Numbers, a story he says involves “a 12-year-old with a terrifying gift, a father with a haunted past, a family sailing vacation from hell, a handful of ghosts, and a hammer.” This book, like his others, echoes his personal experiences. “My favorite leisure activities involve my kids – taking them to the beach, going boating or skiing,” he says. “After working such long hours, I really appreciate family time.”


2013 promises to be a busy year for Wilson, with the book launch in New Orleans in June and  an appearance as one of 22 authors hosting fans in New York City at “Fanfest”, a new event that is part of the International Thriller Writer’s annual Thrillerfest, later this summer. Wilson will host fans at the event on July 12th beside some thriller giants like Lee Child, Joseph Finder, Heather Graham, Michael Palmer, and RL Stine, just to name a few. “It’s a bit intimidating to mingle beside some of my writing heroes,” Wilson admits, “but it's sure to be a great time!” And of course he is hard at work on novel number five, which he hopes to finish writing by summer’s end.


In addition to his own writing, Wilson is also the proud father of an up-and-coming author. His son, 12 year-old Connor Wilson, made headlines last August as the youngest traditionally published fiction writer in America. Connor’s award winning book, A Giant Pencil, keeps father and son busy with book signings, media appearances, and a busy schedule of school appearances around the country.While Wilson sometimes finds it difficult to balance writing with his busy life as a surgeon, a husband, and the father of three, Wilson loves the process. “Writing is like watching my favorite TV show,” he says. “I can’t wait to find out what will happen next.” And anyone who has read one of his books is sure to feel the same.

For more information about Wilson and his books, visit the his website at www.jeffreywilsonfiction.com


Find out more about his son Connor Wilson at www.thegiantpencil.com
Posted by Jackie Minniti at 10:46 AM No comments: