A Conversation with Honey Ingersoll - A Guest Post by Jean Harrington 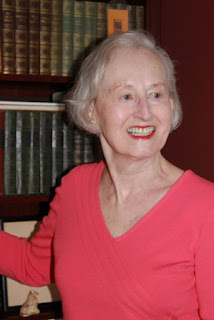 This month, Fabulous Florida Writers is pleased to welcome guest blogger, Jean Harrington. Jean is the author of two cozy mystery series - Murders by Design and Listed and Lethal, as well as two historical romances. Jean was our featured writer on  November 4, 2014.

Hello to all, and a big shout-out to Jackie Minniti for giving Florida writers such a fabulous venue to showcase our work. As for my work, well, the last several years I’ve been busy writing cozy murder mysteries.

My first series, Murders by Design, was set in Naples. Though it was great fun to write, going forward I wanted to challenge myself by creating stories in a brand new setting with a brand new cast of characters. For that, I turned to Middle America with a heroine from the heartland. The result, Murder on Pea Pike, Book #1 in the Listed and Lethal Series, was released on September 1, 2017. It’s the story of Honey Ingersoll, a girl who’s had a rocky beginning in life but is determined to remake herself.  I’d tell you all about it, but Honey’s here and dying to tell her own story, so I’ll turn the mic over to her.


As Jean mentioned, my name is Honey Ingersoll. I was born and bred in Savannah which accounts for my southern drawl. As for my blond hair, that’s from Daddy. My smile, so I’ve been told, is from Momma. I surely didn’t get that from Daddy. He never smiled. Not once while I was growing up. Which is one reason why when Momma died I left the family trailer—a double wide—right after high school.

Except for missing Momma, I never regretted escaping from Daddy, but I sure did regret hooking up with Billy Tubbs. We weren’t together long, though. I moved out the day he gave me a black eye for no reason except he felt like it. A week later, while waitressing at Josie’s Diner, I met Saxby Winthrop. I was pouring him a cup of Josie’s left-over coffee when he asked if I’d like to work in his real estate office.

“That would be wonderful, Mr. Winthrop,” I said, as he stared into my eyes, “but I don’t know a blessed thing about real estate.”

‘Not a problem, Honey.’ He smiled and took my free hand, the one not holding the carafe. ‘I’ll teach you everything I know.”

And so he did. At the time I didn’t expect his lessons would include an insider’s knowledge of the realty business, but I learned about that too. Actually I learned a lot under Saxby—mortgage rates, contract terms, liens, blind trusts, short sales, foreclosures and, most import of all, how to close a sale, Saxby style.

No surprise there. Saxby was one of the two most successful real estate brokers in Eureka Falls, Arkansas. He owned a block of office buildings, half of Main Street, and an antebellum mansion on the edge of town he never once invited me to step foot in. When I found out he didn’t want his momma, Miss Eloise, to know about me, I realized I had to change into the kind of girl a man didn’t hide behind the barn like a pile of manure.

Out went my big hair, platform stilettos and cherry-flavored chewing gum.  I used fewer “y’alls” and more “how are yous?”  I even stopped having Cindy Mae color-streak my hair and tossed all my tube tops. Didn’t buy another one, not even when Belinda’s Boutique put them on sale. Instead I bought a navy blue suit, the kind where the skirt matches the jacket, and a white cotton shirt I kept buttoned at all times.

None of this was exactly a college education, like going to Emory or anything, but it helped. And when I left Saxby to run the real estate office of his arch rival, Sam Ridley, I was twenty-two and ready to take on the world. Or so I thought.  But I hadn’t planned on finding a dead body in the first house I had up for sale. That’s another story, though, so if y’all don’t mind, I’ll give the mic back to Jean.


Thank you, Honey. You know folks, Honey’s complete story—the tale of what happens when a hot property meets a cold corpse—which she’s too modest to relate here, is available in e-book and trade paperback at Amazon, Barnes & Noble, and wherever books are sold.

Thanks for listening. Enjoy!

Posted by Jackie Minniti at 12:11 PM No comments: 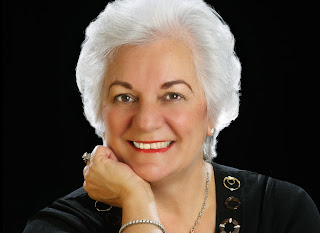 Nina Romano’s love of storytelling began around her grandmother’s table. As a child listening to her family’s stories, Romano had no way of knowing they would eventually inspire five poetry collections, two poetry chapbooks, a short story collection and a trilogy of novels that would earn her several awards and rave reviews from readers.

Born and raised in Brooklyn, NY, Romano was an avid reader whose writing talent blossomed early. “As a child, I wrote little love notes to my parents and left them by their bedside,” she recalls. “I began writing poems when I was thirteen.  I started my first novel at sixteen but put it away when I realized I had no life experience.” She graduated from Ithaca College and went on to earn a Master of Arts degree from Adelphi University. After several years as a middle school teacher, she moved to Italy with her husband, Felipe, where she lived for the next twenty years. It was here that Romano began submitting her poems to magazines and even self-published a few poetry books.

In 1990, Romano returned stateside and settled in Florida where she made the decision to seriously pursue a writing career. She enrolled in Florida International University and earned a Bachelor of Arts and a Master of Fine Arts degree in Creative Writing. “I took five grad courses in poetry from Campbell McGrath,” she says. “My final portfolio was a fifty-page stack of poems.” This served as the basis for her first poetry collection, Cooking Lessons. Inspired by her years in Italy, Cooking Lessons was praised by Midwest Book Review as … “a poetic treat not to be missed.”
Romano published three more poetry collections, ending with She Wouldn’t Sing at My Wedding, a book she describes as “one long, elegiac narrative poem in fifteen sections” written for her dying mother. She calls it “one of my best and most difficult.” Romano then turned to short stories with the publication of a collection titled The Other Side of the Gate. According to Romano, “Short stories are the most difficult to write because you must be concise. I read poetry before I begin writing fiction. Something transfers that makes it easier to begin.”

Romano’s transition to novels actually began with a short story. As a child, she was enthralled by her grandfather’s tales of his experiences in the Italian Navy during the Boxer Rebellion. After two visits to China, Romano wrote a short story titled “The Rain,” which was published in Hong Kong’s Dim Sum Literary Magazine. The story grew into her first full-length novel—The Secret Language of Women, a haunting love story of a Eurasian woman and an Italian sailor. The book is written with a lyrical beauty that elevates it to the level of literary fiction and echoes Romano’s poetic soul. It was awarded a gold medal in the Independent Publisher Book Awards.

The year that her first novel, The Secret Language of Women, was released, Romano also had her fifth poetry collection published.  Westward: Guided by Starfalls and Moonbows was written for her dying brother, her first cowboy hero.  Romano then signed on for two companion novels to create The Wayfarer Trilogy.  Lemon Blossoms, the second book in the series, is set in Sicily and chronicles a woman’s struggle with love, loss and intimacy. The final installment, In America, is a coming-of- age story set in New York during the Depression. It follows a young Italian-American girl’s quest for her true love and true self. All of Romano’s novels were finalists for book awards.

Having completed her Wayfarer Trilogy, Romano recently finished a Western novel set between New Mexico and St. Louis, Missouri.  For her next writing projects, she’s contemplating a mystery set in Leningrad in 1950 and a WWII novel based on the life of her one hundred and three year-old aunt who lives in Italy. “The past makes me what I am today,” Romano explains. “My family background influences everything I write. In all my writing, there are lots of family stories and family history. It’s beautiful to investigate how things could have been and to envision how they might be. Times past help our understanding of the era we’re living in.”

For more information, visit the author’s website at www.ninaromano.com
Posted by Jackie Minniti at 3:09 PM No comments: