A Florida Homeoming - A Guest Post by Christine Kling 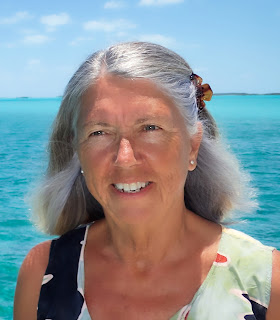 It’s great to be back here on Jackie Minniti’s Fabulous Florida Writers blog to share the news of the release of Mourning Tide, the long-delayed fifth book in my Lauderdale-based Seychelle Sullivan series. Though I am something of a sailing nomad these days, I still call Florida home, and returning to this series was a homecoming of sorts for me.

Back in 2007, when I finished Wreckers’ Key, I had left my tug and salvage captain Seychelle Sullivan in a distressing fix–and I didn’t know what to do about it. Throughout those first four books, Seychelle had convinced herself she would make a lousy mother, therefore she never wanted to have kids. And then I went and gave her a kid.

I know. Crazy, huh? I tried other endings, but nothing else seemed to fit. Of course, this is what suspense writers do–and it’s our job to figure out how to get our characters out of those fixes. But this time, I had no earthly idea how to write about Seychelle as the mother of a newly adopted infant. In addition, my publisher for the series, Ballantine, was not interested in buying a fifth book, so I set Seychelle aside and started a new and very different series of international thrillers.

It was eight years later while cruising aboard a sailboat in the South Pacific that my thoughts returned to Seychelle. We had both matured and changed: I had become a grandmother, and I finally began see how Seychelle could grow into her role as a mother and how she would relate to her partner B.J. I was also feeling a little homesick for Florida, and I wanted to spend time there again, even if only in my imagination.

Once at a ladies’ luncheon at the Don CeSar Hotel on St. Pete Beach, I was seated next to a sweet-looking lady in her Sunday best. With a crust-less cucumber sandwich in one hand and a cup of tea in the other, she leaned close and announced in a scolding tone, “I think Seychelle is reckless.” I was surprised at first, but the more I thought about it, I decided she was right. The word reckless means having a defiant disregard for danger or consequences. Seychelle was a character who cared deeply about saving or “salvaging” the lives of others, often putting herself in danger to do so. But that wouldn’t work for a mother of a small child, so how could she get involved with crimes as a mother and an amateur sleuth? I decided that the decision to adopt a child would mark her retirement from sleuthing and help to explain the time gap from the last book to this new one.

So, the next question was what would bring her out of retirement? Again, my ideas as so often pulled from real life. Way back when Florida was hammered by Hurricane Charlie, I received an email from a fan who wrote that about a month after the storm, the authorities were raising a sailboat that had sunk in the Caloosahatchee River and when they pumped it out, they found a human femur in the mud inside. The author of the email had written that this was something that Seychelle needed to investigate. Part of me wanted to write back and ask, “You do know she is imaginary?” That story had always stuck with me, though, and I decided it was time for Seychelle to find those bones.

One of the big challenges of writing about Florida and the Bahamas is that the area changes very quickly. The restaurant that looked over the marina last year has been razed for a new condo tower this year, or the much beloved local pastor has been arrested on corruption charges. So it goes in the Sunshine State. Fortunately, the arrival of new grandbabies afforded me the opportunity to fly back home from Fiji to do the research to stay up-to-date on the evolving landscape of Lauderdale.

Since I wrote the first book in this series, I had become an even more avid sailor, and I wanted Seychelle to do some real sailing in the new book. I decided the plot would take them to the Abacos, my favorite islands. As luck would have it, my husband and I sold our boat, and a friend hired us to deliver a catamaran from the Caribbean through the Bahamas to New Smyrna Beach, so I was able to visit those locations first hand as well.

While it was great fun returning to Seychelle and her friends in Lauderdale, my current WIP is something altogether different. Some fans have asked me if Mourning Tide will be the last Seychelle book. I don’t have an answer for that, but I have learned that you can go home again.

For more information, visit Christine's website at www.christinekling.com or her Amazon Author Page.