Love, War, and Ever After - A Guest Post by Catherine Underhill Fitzpatrick 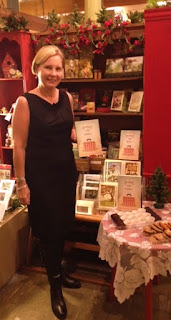 This month, Fabulous Florida Writers is pleased to welcome guest blogger, Catherine Underhill Fitzpatrick. Catherine is the author of two novels, and her articles, stories, and essays have appeared in numerous newspapers, literary reviews, magazines, and anthologies. Her new family memoir, Voyage: A Memoir of Love, War, and Ever After, is a family saga that spans five generations. Catherine was our featured writer on July 2, 2016.


What to do when you're cleaning out closets in your childhood home and discover a hidden cache of love letters and fading photographs of relatives you never knew existed? If you're a former newspaper feature writer and the author of two novels, you write a memoir. For some time, I'd been thinking of researching my family story. When I lifted the lid of an old wood trunk and found more than 100 World War II letters and a velvet-covered photo album, I knew I'd hit the jackpot.

After my dad died, Mom went downhill. In the end, two of my brothers kept vigil with me at St. John’s Mercy Medical Center. It was early December. I sang Christmas carols at her bedside, book-ending the lullabies, she sang to me decades earlier. Beneath the sheet, she tapped her foot to “Silent Night.” When I got to the part about heavenly hosts, she drew her last breath. Eventually, it fell to me and my siblings to do what so many adult children are called upon to do: sort through a lifetime of treasures and trivia accumulated by parents who thought no one would ever see some of them, or who hoped that someday, someone would.

My new book, Voyage: A Memoir of Love, War, and Ever After (eLectio Publishing, 2017), unfolds with a trampoline timeline that melds wartime letters my father wrote to my mother with vignettes in which I describe their mid-century family life in St. Louis, and with essays in which I reflect on my forbears with post-millennial insight.

During World War II, my dad, Bob Underhill, was an affable junior officer serving aboard a Navy minesweeper, a fellow from working-class New York. Merrilee Ann Meier was a stunning St. Louis County socialite entering the halcyon period pretty girls from established families swam into after they finished a degree in anything and before they marry a newly minted lieutenant. In the letters, Bob pours out his affections to Merrilee on wafer-thin military stationary, but glosses over the delicate maneuver required to snip the trip-wire of an underwater bomb, and live. Interspersed with stories-within-the-story, we follow Bob and Merrilee through a 58-year marriage in which they confronted holiday fiascoes and funeral foul-ups, windless regattas and catastrophic tornadoes.

I eliminated some of my father’s letters, those that didn’t reveal character, describe a riveting scene, or advance the plot. At the publisher’s request, I whittled the number of vintage family photos to a dozen or so. A number of happy memories could not be included, for there were so many that a reader would conclude my parents were Ward and June Cleaver. In other cases, I alluded to difficult experiences, but chose to not deal with them expansively. I think the reader had enough to get the drift. For example, the hardest part of the book to write was discovering why my paternal grandparents were never seen, never heard from, never visited, never mentioned. And coming to grips with that.

A good story worth the telling should take matters to their proper end, as well. This one does so early and often, in essays I wrote about how Bob and Merrilee went on to forge a life together, to weather adversity, achieve a measure of prosperity, and rear children during changing, challenging times Theirs is a story that spans years of war, decades of peace, and the breadth of human emotion, and it all began more than seventy years ago, with a letter signed “Just, Bob.”

For more information, visit the author's website at https://cufitzpatrick.com/


Posted by Jackie Minniti at 2:23 PM No comments: 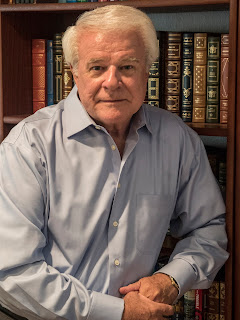 If you’re on a quest for novels that read like non-fiction, a book by Palm Beach Garden author Ian A. O’Connor might be the perfect solution.  O’Connor has penned five novels he describes as “95% fact interspersed with 5% fiction to confuse the reader,” and his stories will have you puzzling over what is true and what is the product of the writer’s fertile imagination.
Born in England, O’Connor came to the U.S. by way of Canada. He wanted to pursue a career in law but joined the Air Force because of the draft and became a career military man.  Before retiring as a full colonel, he held several leadership positions in the field of national security management and was called back to active duty during the first Gulf War. He lives in South Florida with his wife, Candice.

Although he graduated with a degree in Political Science, O’Connor always enjoyed writing.  “About 20 years ago, I found myself drawn to writing like a moth to a flame,” he recalls. He began taking college graduate-level writing courses, attended seminars and writing workshops, and in 2000, completed his first novel, The Twilight of the Day, a thriller set in 1973. It is a powerful story of human triumph in the face of impossible odds, a story of one man's resolute faith in God and country when lesser men would have succumbed. Navy Captain James Vincent Trader endured years of relentless torment as a prisoner of the North Vietnamese but his true descent into hell began when he and nine others were sold in 1973 to a rogue country for 70 million dollars. Who was the buyer, and what was expected of these men? The answer is found in a closely guarded secret held by this extraordinary fraternity of pilots.  “I knew too many pilots who had been shot down but never returned home, and that was my motivation for writing the book,” O’Connor explains. “I still believe people were deliberately abandoned and left to die, especially in Laos, and I didn’t want that to ever happen again.” On September 9, 2017, O’Connor was honored by the Military Writers Society of America in San Antonio, Texas, with the Bronze Medal Award for The Twilight of the Day.

O’Connor’s next book, The Seventh Seal, introduces retired FBI agent Justin Scott who is hired by the Vatican when its ambassador to the U.S.is accused of murdering his mistress.  The Seventh Seal was voted a 2017 Semi-Finalist in the Sixth Annual Kindle Book Awards for best Thriller of the Year. (The winner will be announced on November 1, 2017.) The second book in the Justin Scott series, The Barbarossa Covenant, is based on a fictitious letter penned by Winston Churchill and author Ian Fleming to thwart Hitler’s planned invasion of England. When the letter turns up in the Vatican decades later, Scott is called to verify its authenticity before Doomsday arrives. Kirkus Reviews praised the book as “…a nifty thriller that...holds reader interest with his breakneck plot...”

O’Connor‘s latest novel turns from Justin Scott to a doctor based on a 20-year-old exposé in the Miami Herald. The Wrong Road Home tells the compelling story of Desmond Donahue, an Irish immigrant who spent his life masquerading as a surgeon.  Armed with nothing more than a GED and some bogus medical diplomas, Donahue manages to evade discovery despite many close calls, but at tremendous cost to his personal life. O’Connor was a close friend of the real-life “Desmond Donahue” who requested that O’Connor tell his story. “I knew him for years,” O’Connor explains. “Even as a friend, he was always reserved and distant. He seemed very lonely. He called me one Saturday night in tears and told me his life was ruined. The next morning, I opened the paper and saw a story on the front page about a prominent Miami physician who had been unmasked as a fraud.” Florida Weekly describes the book as “…a highly realistic psychological portrait of a man addicted to a dream and determined to attain it.”

O’Connor has completed the third novel in his Justin Scott series, The Masada Option, which is scheduled for release in 2018. The story unfolds at lighting speed over a five day period in May when a rogue element inside Israel's Intelligence Service takes matters into its own hands and prepares to launch a devastating nuclear first-strike against the Muslim World from about a hijacked British Trident submarine with its arsenal of nuclear missiles capable of destroying most of the earth's major cities. Iran, Syria, Pakistan, Malaysia, and the entire Arabian Peninsula will be obliterated in one fell swoop, rendering Islam powerless for the next thousand years. This fanatical band of outlaws are willing to sacrifice the State of Israel to nuclear retaliation only because they believe Judaism will survive in flourishing communities in New York, Chicago, and Los Angeles.  The Prime Minister of Israel does not know who he can trust inside his own government to stop the madness and turns to the one man he believes can find the solution to avert an imminent worldwide calamity. That man is his friend, retired FBI agent Justin Scott.
While promising an edge-of-the-seat reading experience and plots that read like today’s headlines, O’Connor hopes his books will leave readers satisfied that their time and money was well spent.

For more information, visit the author’s website at www.ianaoconnor.com.
Posted by Jackie Minniti at 12:09 PM No comments: