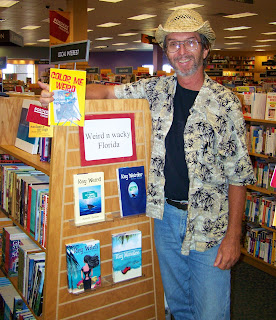 What do a Key West cat juggler, the sexy leader of a California cult, a mysterious Everglades hermit, two bumbling criminal brothers on the lam, a womanizing Wal-Mart greeter, and a former possum rancher named Taco Bob have in common? They’re all the comic creations of the delightfully wacky imagination of Gainesville writer Robert Tacoma. Tacoma describes his books as “Florida fiction that’s stranger than fiction.

Tacoma, who grew up in Tampa, didn’t set out to become a writer. A former construction worker, Tacoma was a huge fan of Florida writers like Carl Hiaasen, John D. MacDonald, Randy Wayne White, James W. Hall, and Tim Dorsey. But it was a book by California writer Christopher Moore that changed his life. According to Tacoma, “I’d read a book by Tim Dorsey, and in the back of that book was a list of some books with funny names. I found one of the books and read it. It was by Christopher Moore. I went to his website, and he had a discussion forum. I’d written a few little silly things, and I started putting some of them on there. One day, he wrote back and said, ‘You know, that’s really funny. That’s great.’ He encouraged me, so I can blame it all on Christopher Moore.”

Three years later, Tacoma completed his first novel, Key Weird. “I have no idea where the idea for that book came from,” he says. “The ideas just came to me as I started writing.” It marked the debut of Tacoma’s signature character, Taco Bob—a down-on-his-luck Texas possum rancher who wanders into Key West after a string of bad breaks. “I needed a character that could go through the stories unaware of what’s going on," Tacoma explains. "Even though Taco Bob’s the central character, the action usually takes place all around him but doesn’t directly involve him.” In spite of the similarity in their names, Tacoma says that “there’s not as much of me in Taco Bob as you might think. He’s a lot more laid back.”  The two do, however, share a passion for fishing. “One of the things I like best about living in Florida, besides the climate and the water, is the fishing,” he says. “I’ve been fishing the Hillsborough River for over fifty years. I wanted to write about Florida and have a good excuse to go fishing.”

Tacoma continued the fishing theme in Key Weird’s sequel, Key Weirder. In it, Taco Bob decides to travel the state searching for the ultimate trout recipe. Unbeknownst to him, he is being pursued by an assortment of unscrupulous characters in search of a golden idol that Bob has been inadvertently using as a doorstop. Tacoma includes several original recipes in this book (including one for a killer smoked fish spread). Key Weirder was followed by Key Witch, a story that includes a little lovestruck space alien whose observations conclude each chapter. Key Manatee, Tacoma’s fourth novel, is “a parody/homage to the Travis McGee series.” It was the hardest book for him to write. “I really enjoy John D. MacDonald’s books,” he says. “I’ve read every one of them twice. I wanted to stay close to Travis McGee while telling my own story. And I wanted the ending to have everybody get what’s coming to them.” Tacoma’s spirit of fun continued with Color Me Weird, a small volume he describes as “a coloring novella for grown-ups.” This was followed by three more novels – Key Lucky, Possum Surprise, and Sheriff Skunk. Tacoma’s latest offering, Key Dali, is the story of a Key West street performer who pairs up with his old friend, Taco Bob, to save an orphanage from an unscrupulous bank (with predictably hilarious results.)
Tacoma really enjoys his writing career, and he doesn’t think he’ll be running out of weird ideas for his stories anytime soon.  The way he explains it, “There’s this sifting thing that happens here in Florida. All the really strange stuff seems to find its way into Florida and the Keys.” He hopes his offbeat stories will bring smiles to his readers’ faces. “My number one job is for my readers to have a good time,” he says. “There are so many bad things going on today. I want to make people laugh and have fun.”
To find out more about Robert Tacoma’s books, you can visit his website at www.tacobob.com

Next: Kristin Harmel - The Lit Chick
Posted by Jackie Minniti at 9:54 AM No comments: