The Legal Thriller Noir - A Guest Post by Claire Matturro 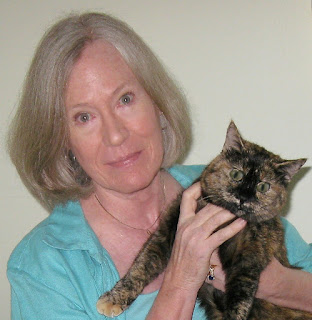 This month, Fabulous Florida Writers is pleased to welcome guest blogger Claire Matturro. She is the award-winning author of 6 legal thrillers, the latest of which, Privilege, was released in May. Matturro was our featured writer on March 20, 2011.

Privilege, my newest novel, is a is a dark, gritty, sexy tale of a corrupted law firm, a beautiful, but jaded attorney whose shadowy past snares her in a brutal marriage, a violent ex-con stalker seeking his own cross-eyed justice, a lawyer murdered in his bedroom, and an honorable cop caught in the cross-fire.

Like my prior five books, Privilege is legal thriller set in Florida. There’s a reason my books are inspired by the beauty and insanity of Florida and all deal with lawyers and the law. I am—or I was—a lawyer who practiced law in Florida and I’ve lived a good portion of my life in the fabulous State of Florida and live here now.

Yet, Privilege marks a drastic change for me as my first four novels (Skinny-dipping, Wildcat Wine, Bone Valley, Sweetheart Deal (William Morrow)) were all light-hearted, humorous legal thriller cozies, with a chick lit gloss. My fifth (Trouble in Tallahassee) was a romantic suspense/legal thriller cozy. But now, Privilege veers dramatically off in a different direction, definitely aimed at the dark side, pulling into the plot techniques from noir, thriller, and police procedural novels. Hence, I am calling Privilege a legal thriller noir. I didn’t invent the term or the concept, but I do confess a google search of the phrase doesn’t bring up nearly as many hits as it might.

Mind you, I am not comparing Privilege with Body Heat in a direct fashion as the plots differ greatly, but I’m using the movie as an example of what a legal thriller noir is at its finest.

Why I changed from writing cozies, with their amateur women lawyer sleuths and their funny hijinks, to a darker legal thriller is complex, and maybe influenced by the more cynical times we currently live in. Or, perhaps just as simply, I wanted to try my hand at something different. Why not a noir? After all, I was the kid who read Micky Spillane, John McDonald, Dashiell Hammett, and Raymond Chandler when my teenage girlfriends were sneaking their mother’s Jackie Collins novels out of hiding to read.

One thing that won’t change in my novels, though, is my love of Florida and how the State and its environs are and will remain part and partial of the story. 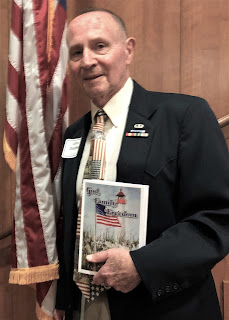 John Stoeffler’s life has been governed by three guiding principles: his unshakable faith, his love of family, and his reverence for the freedom that is his birthright as a citizen of this country. In a world that sometimes seems to be going crazy, this St. Petersburg writer has penned a collection of poems that reads like an oasis of sanity. God, Family, Freedom celebrates the things that make life worthwhile.

Stoeffler, a Missouri native, graduated from Pennsylvania Military College (now Widener University) and served in the army from 1964-1966, spending 13 months in Korea. After being discharged, he married his artist wife, Linda, and went to work for General Electric. He retired in 2003, and thirteen years later decided to move to Florida to downsize and be near his daughter and her family. “The things I like best about living in Florida are the opportunities related to writing, new friends, and meeting regularly with fellow veterans,” he says.

Stoeffler became interested in writing when he lived in Missouri. “I started writing letters to the editor of the St. Louis Globe Democrat on a regular basis, and many were published,” he recalls. “Then the Suburban Newspapers, a weekly publication, offered me the opportunity to submit columns on a regular basis. Before long, I was writing weekly commentaries and op-eds that dealt with subjects from politics to humor to views on everyday life.”

From there, Stoeffler branched out to writing and composing country songs. “Lyrics are actually a form of poetry,” he explains.The lyrics of several of the songs have made their way into God, Family, Freedom.  Among these are “You’ll Always Be My Little Girl,” written for his daughter’s wedding, and “I Spell Love Y-O-U” which he penned for his wife on their 25th wedding anniversary.

God, Family, Freedom is Stoeffler’s first published book. He got the idea after a presentation he made to a veteran’s group. He read “I Am America,” a poem he wrote as a commentary piece, and “June 6, ’44” a poem that commemorates D-Day, and several vets suggested he put together a collection of his poetry. “I liked the proposal,” Stoeffler says, “and the rest is history.” He spent a year and a half composing the 56 poems that comprise God, Family, Freedom. “The hardest part was coming up with a subject and then rewriting and rewriting and rewriting,” he says, “but I enjoy the personal reward of accomplishment and seeing others enjoy the stories I tell through my poetry.”

According to Stoeffler, there are several things that set God, Family, Freedom apart from other poetry collections. “Too much that is written today is dark,” he says. “My poems will bring a smile and maybe a laugh. There are a couple of them that, like an O. Henry story, will surprise you at the end. And some may bring a tear of joy.” Each poem is accompanied by a picture or photo intended to draw the reader into the subject. In addition, the book’s cover is from an original picture painted by Stoeffler’s wife, Linda.

Stoeffler hopes his poems will touch the reader’s heart by bringing back fond memories. “Virtually every poem will have meaning to the reader, as they describe many common experiences, he says. “In these troubled times, God, Family, Freedom is meant to be a beacon of hope and joy.”