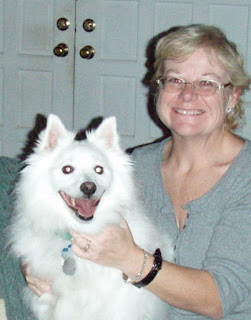 If you're a reader who enjoys stories that feature strong female protagonists, pick up a book by Tampa writer Vicki M. Taylor. Her tales of women who face seemingly impossible challenges with courage and resolve will inspire readers and give them a glimpse into her own personal struggles.

Taylor was born in Michigan’s Upper Peninsula but left after high school graduation and never looked back. Following a stint in the Marine Corps, she sought out warm, sunny places like South Carolina, California, and Arizona. “I’m just not a cold-weather person,” she says.  So it wasn’t surprising that, after her three children were grown, she found her way to Florida where she enjoys “living in Vacationland” with her husband, Greg, her 12-year-old American Eskimo dog, and a Sun Conure  parrot who “flew into our yard one day and adopted us.”

Taylor did not begin her career as a novelist. She graduated with a degree in Computer Science and took a programming job in the tech world. One day, her boss asked her to put together a user’s manual for a new product. Taylor enjoyed the project so much that she decided to focus on technical writing, eventually starting her own technical writing and consulting company after nearly fifteen years working her way up to manager. After a few years as a successful business owner, a health crisis caused her to reassess her life. “I was diagnosed with Grave’s Disease and had to go on bed rest,” she recalls. “It made me realize that life was short. I’d always wanted to write fiction, and I didn’t want to wait any longer.” So in 1998, Taylor left the business world and began writing fiction in earnest. Around the same time, she and five others founded the Florida Writers Association, which after fifteen years is still the only statewide writing organization in Florida.

Her first novel took eight months. She admits that it’s “still sitting on my bookshelf, and will never see the light of day.” Things changed, though, with her next attempt. Forever Until We Meet, the story of a lonely woman who falls prey to an unscrupulous man on an online discussion board, was published in 2001. Taylor calls the novel “a composite of many women’s stories about how they’d been taken advantage of on computer forums.” Taylor followed this with three more novels featuring women in crisis: Not Without Anna, a story of a mother trying to cope with her daughter’s death; Trust in the Wind, the tale of a struggling single mother; and Out for Justice, a suspense novel about a young female detective investigating a child’s murder. Taylor has also written three novellas in the Romantic/Suspense, Science Fiction/Fantasy and Speculative Fiction genres.

Her latest book, Good Intentions, is a family drama based on a newspaper article about a woman whose family tried to adopt a 14- year-old pregnant girl. “The story touched my heart,” Taylor says. “I contacted the reporter for more information, and the reporter put me in touch with the family.  I wanted to fictionalize their story and add more drama.” In the book, Taylor’s fictional family faces deception, infidelity, drugs, child abuse, cancer, sexual abuse and home invasion. The process of interviewing, writing and publishing took four years, but in December, 2012, Good Intentions was finally released.

Taylor is currently working on a memoir, something of a departure from her other works.  In it, she shares the unique, intensely intimate story of her ongoing struggle with bi-polar disorder. Like her fictional heroines, Taylor has done battle with a host of personal demons. “The last five years have been very difficult.  I’ve been in and out of hospitals,” she says. “I’m hoping my story will resonate with people in similar situations.”  Taylor was also the subject of a local news program that helped demonstrate how far medical advancements have come in regards to Electroconvulsive Therapy. (You can see the news story at http://www.abcactionnews.com/news/health/shock-therapy-is-out-of-the-dark-ages-and-bringing-light-to-thousands-of-bay-area-patients. Taylor admits that it feels strange becoming the main character in one of her books. “My stories tell about strong women who face insurmountable odds and succeed,” she says. “I’d like to have that kind of strength and be able to show others how strong I really am.”

Taylor credits much of her positive success to journaling which inspired her to write Words Heal, a self-guided creative writing, expressive therapy, and journaling process to help others who may have past or present traumas and want to live more joyful lives. (Find Words Heal on Amazon.)
Vicki is now taking life easier, shifting her priorities from constantly working to spending more time serving God, loving her family, which includes four grandchildren, supporting her husband and keeping herself stable.

Posted by Jackie Minniti at 10:44 AM No comments: 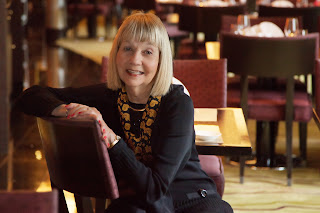 Mary Magruder Katz is not your garden variety attorney. Half Southern Baptist, half Jewish, with a love life as fiery as the South Florida sun and a penchant for getting herself into trouble, this feisty female protagonist is the title character in a series of mystery novels by Miami judge-turned-writer Barbara Levenson. The Mary Magruder Katz Mysteries give readers an insider’s view of the legal system while taking them on a suspense filled romp through the city that has become Levenson’s adopted home. Levenson describes her books as “Nancy Drew for grown-ups.”

An Ohio native, Levenson graduated cum laude from the University of Miami’s Law School and began her legal career as a prosecutor. She later started her own law firm focused on criminal defense and civil rights litigation. In 1992, Levenson was elected to a judgeship in the Miami-Dade circuit court.  “I’d always loved writing, but with my job, I never had the time to do anything other than legal writing,” she says. “I started writing fiction as a retirement hobby. I had lots of ideas from my time in court. Instead of focusing on the facts of a case, I began writing about the people. The rest was simple.” She signed up for a writing course at Miami-Dade College and was “so intrigued” that she took another. Her instructor was impressed with her work and suggested she apply for a summer program in Ohio. Her manuscript was accepted, and after completing the program, she came home and began writing in earnest. A year later, her first novel, Fatal February, was published, and Mary Magruder Katz was born.

Fatal February (2009) started as a series of short stories based on Levenson’s experiences in the courtroom. “Mary is a composite of many of the women attorneys I knew,” Levenson explains.  “I hope their viewpoint comes through to the readers.” Mary is also a product of Miami: unpredictable, edgy, passionate and energetic. In Fatal February, her life is turned upside-down when a minor traffic accident introduces her to Carlos Martin, a handsome Latin real estate developer.  Her love affair with Carlos causes her to break her engagement, lose her job with her former fiancé’s prestigious law firm and start her own law practice. Soon Mary finds herself defending the prime suspect in a high-profile Miami murder case. The Library Journal praised Fatal February as “A fun debut, full of humor and joie de vivre.”

Mary’s exploits continue in Justice in June where she becomes entangled in three cases: two personally connected to Carlos and one that puts her life in danger as she investigates wrongdoing in Miami courts.

Outrageous October, the third book in the series takes place in Vermont. Mary leaves Miami after a nasty break-up with Carlos and heads for the tranquility of a small Vermont town. Unfortunately, an unsolved murder pulls Mary into a web of intrigue.  A mysterious intruder, an abducted college co-ed, a complicated relationship with a handsome young attorney and a feud between neighbors that ends in homicide soon make Mary long for the comparative peace of Miami.  Levenson spends  summers and fall in Quechee, Vermont. “This book was written to satisfy my Northern New England friends who wanted a book of their own.

Neurotic November was launched in November, 2014 at an amazing launch party at Books and Books in Coral Gables.  This beautiful independent book store was filled with a standing room only crowd and a sell-out of books. Readers were happy to find Mary returning to Miami in a whirlwind of new cases. The plot involves the murder of a friend’s ex-husband, and a University of Miami football player accused of sexual battery on an underage girl.  Levenson hopes Mary’s exploits will entertain her readers and leave them feeling like they’ve vacationed in Miami. “Miami is so much more than South Beach,” she says. “It’s an exciting city with the diversity that adds so much to life.  But it’s also filled with people who live like people everywhere. They work, go to school, raise kids. They just do it in better weather.”

This summer finds Levenson in the midst of writing Dangerous December that will be available in the winter of 2016.  Of course, there are murders, and a Medicare fraud case, among other chaotic happenings.  Mary and Carlos’s hot romance rises to new levels.  The Thanksgiving recipes that accompanied Neurotic November were such a hit that Dangerous December will include Christmas and Chanukah recipe surprises.  Look for family fireworks by New Year’s Eve.

When asked about the future for Barbara Levenson, she confided that she is working on a serious novel about the lives of four women and one Cuban rafter.  Stay tuned!

For more about Barbara Levenson, visit her website at www.barbaralevenson.com.

Posted by Jackie Minniti at 11:15 AM No comments: