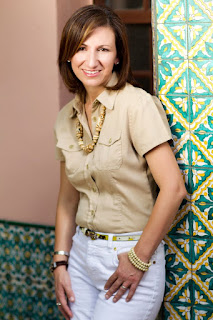 West Palm Beach writer D.J. Niko (pseudonym for Daphne Nikolopoulos) was bitten by the travel bug early in life. This self-described nomad has visited some of the world’s most remote and exotic locations, and she uses her experiences to create thrill-packed adventures that span continents and centuries.
Born in Athens, Greece, Niko immigrated to Florida with her family in the late 70s. After graduating from the University of Central Florida, she took a job as a writer/editor for a weekly publication in West Palm Beach. “I’ve loved writing since I was young,” she says. “I wrote essays, poems and graphic novels in elementary school and took many literature and writing courses in college. So I knew I wanted to write professionally when I took the job at the paper.” After a few years, however, her wanderlust got the best of her, and she decided to take some time off to backpack around the world. “I sold my car and gave up everything,” she recalls. “It was a very formative experience, and I’ve been traveling ever since.”

Niko parlayed her passion for travel into a career as a travel writer.  After selling an article to the Miami Herald, she spent ten years freelancing, writing articles about locations “way off the beaten path.” Niko eventually accumulated enough material to write a book. “During my years as a travel writer and a traveler/seeker, I had gathered amazing experiences and observations,” she explains. “It wasn't specific research. It was just a part of the process. So when I decided to write fiction, it was natural to write about adventures and exotic places because that was my experience.”

Niko’s fascination with Ethiopia made it a logical setting for her first novel, The Tenth Saint. According to Niko, “I knew I wanted to write about Ethiopia because of its ancient traditions and cultures and its profound yet quiet spirituality that informs every aspect of daily life.  Setting The Tenth Saint there was a good excuse to study Ethiopia in greater detail and to return there.”
The Tenth Saint introduces Sarah Weston, an archaeologist who shares Niko’s passions: adventure, antiquity and mysteries hidden in the earth. “There’s some of me in Sarah, but she’s more idealized and has better legs,” Niko says. The Tenth Saint begins with Sarah’s discovery of a cryptic inscription in a mysterious tomb. Her determination to decipher its meaning leads her, along with her colleague, Daniel Madigan, into danger when they discover a conspiracy determined to keep the inscription a secret.  The Tenth Saint was awarded a gold medal in the prestigious Florida Book Awards, an honor Niko calls “an insane surprise.”

After the positive response to The Tenth Saint, Niko penned a sequel. The Riddle of Solomon, published in 2013, has Sarah and Daniel discovering an ancient scroll that contains a mysterious riddle. As they search for the riddle’s solution, they find themselves facing a formidable enemy – a psychopath who believes he is Israel’s long-awaited Messiah, a direct descendant from the line of King Solomon. Niko got the idea for the story from her husband. “He was telling me about Solomon and the legends surrounding him,” she says. “I began researching and became fascinated by Solomon. Even though he was flawed, he exemplified the qualities we all strive for as humans – wisdom, faith, piety. And he had the leadership ability to unite his people and inspire them to be better.”

In addition to her job as editor of “Palm Beach Illustrated” and editorial director of Palm Beach Media Group, this busy mother of 6-year-old twins has managed to complete two more writing projects – The Oracle, the third novel in the Sarah Weston series, which released this month, and The Judgment, a stand-alone historical fiction set in the 10th Century BC, releasing May 2016. Niko her hopes readers will enjoy escaping with her to fascinating and mysterious locales and experiencing adventures that transport them out of the everyday and back in time.

For more information, visit the author’s website at www.djnikobooks.com
Posted by Jackie Minniti at 10:58 AM No comments: