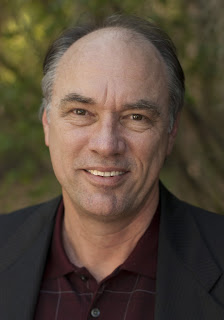 Ken Pelham likes to push the envelope. This Maitland writer's stories test the limits of his readers' imaginations while taking them on unforgettable adventures that will keep them hooked to the last page. This is no small feat for a guy who spends his days as a landscape architect.

Born in Fort Myers, Pelham grew up in the small town of Immokalee. He was always an avid reader and started writing in middle school where he created comics for his friends. In high school, he moved on to short stories and a play. As much as he enjoyed writing, economic considerations led him to channel his creative talents in a different direction, so he pursued a degree in landscape architecture at the University of Florida.

He started writing short stories and nonfiction articles after he graduated from college. Several of his stories were published in magazines, so he decided to try his hand at a novel. After two failed attempts, he set to work on a suspense/thriller titled Place of Fear. It introduced his signature character, Dr. Carson Grant, a protagonist Pelham describes as “prickly and mysterious, a little Indiana Jones, a little serious archaeologist.” Even though he was unable to place the book with a publisher, Pelham went on to write a sequel, Brigands Key, set on a quirky little island on Florida’s west coast. Writing Brigands Key was a multi-year process. Pelham wrote seven drafts before he finally submitted it to publishers.

The effort paid off. In 2012 Brigands Key was picked up by Five Star Publishing and won first place in the prestigious Royal Palm Literary Awards. Praised as “A perfect storm of menace…” by Florida Weekly, the story begins when Carson Grant discovers a body while diving near a subterranean freshwater stream in the Gulf. He is soon facing off against the local police, a mysterious plague, a Category 5 hurricane, and a crazed murderer. The success of Brigands Key led to the publication of Place of Fear, which earned Pelham his second Royal Palm award. Pelham’s affection for his fictional Brigands Key led him to use it as the setting for several short stories included in two collections: Treacherous Bastards: Stories of Suspense, Deceit, and Skullduggery and Tales of Old Brigands Key. Pelham has also penned a non-fiction book, Out of Sight, Out of Mind: A Writer’s Guide to Mastering Viewpoint, which won a Royal Palm Award for “Published Book of the Year.”

Pelham’s latest project, The Prometheus Saga, is a unique science fiction anthology reminiscent of the classic short story collections by Ray Bradbury, Rod Serling and Richard Matheson. “I was investigating how to use the new technology in publishing in an anthology,” he says. He conferred with friend and fellow writer Charles A. Cornell, and they came up with the idea of having a select group of writers create stories that shared a common premise. This was the birth of the Alvarium Experiment, a consortium of writers working “independently together” toward a single goal.  “Alvarium” (Latin for “beehive”) reflects the philosophy of writers working as a colony. “We decided to create a theme and a character that had no bounds but made sense,” he says. The stories are tied together by the enigmatic Prometheus, a humanoid alien probe sent to observe the human race throughout its history. Created by an alien intelligence, Prometheus sometimes interacts with mankind, but it is left up to the reader to decide if it is malevolent or benevolent.

The Alvarium Experiment followed up with a second anthology, Return to Earth, which explores scenarios in which the first visitors to our planet just happen to be us. Pelham's contribution to that project, "Under the Whelming Tide," is a semifinalist in the 2017 Royal Palm Literary Awards. And in July of this year a third anthology, The Masters Reimagined, will be released, in which classic works of literature will be visited with a slant towards speculative fiction.
Pelham's short story, "The Queen Beneath the Earth," appeared in Darkwater Syndicate's gripping horror anthology, Shadows and Teeth, Volume 2, in April, 2017.

Staying busy, Pelham's column appears monthly on the FWA website. He's also hard at work on a nonfiction book about the evolution of genre fiction, and on the third book in his Carson Grant series, Grand Ruin, which involves the mysterious death of a high school football star and the secret of an abandoned castle. He feels that what makes his novels unique is that they push the limits of believability. “I like keeping a lot of balls in the air at once and multiple characters with competing agendas,” he says. “I hope my books give readers an enjoyable few hours of reading and leave them with something to think about.”

For more about Ken Pelham, visit his website at www.kenpelham.com

Learn more about The Prometheus Saga on Facebook at
https://www.facebook.com/ThePrometheusSaga?fref=ts 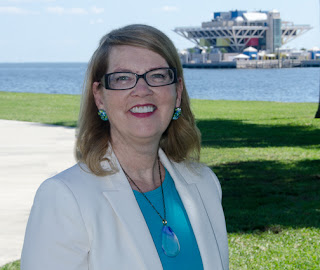 St. Petersburg writer Cheryl Hollon knows firsthand the stresses and rewards of running a business. “There have been lots of small businesses within my family,” she says. “My husband, George, has been part-owner of a printed-circuit board manufacturer and sole proprietor of a screen-printing shop. Our oldest son, Eric, has owned three marine science research companies, and our youngest son, Aaron, owns a patent research agency. I understand completely that being able to work your own hours translates to needing to work 24/7 just to stay afloat.” Hollon is using her experience to create a unique series of mystery novels set in our very own Grand Central District – the Webb’s Glass Shop Mysteries.

For Hollon, an Ohio native, becoming a writer was a circuitous journey. She attended Sinclair Community College and was later offered a position as an executive secretary at NCR.  There she read and typed reports, eventually learning so much about computer protocols that she was able to program keypunch machines and de-bug codes.  She was promoted to assistant programmer, earned her engineering degree, moved to Florida, and wound up designing and building military flight simulators. As fulfilling as she found her career, she developed a passion for glass art, and, along with her husband, began creating original artwork in a small glass studio behind their house. This was the impetus for her foray into writing.

Hollon, an avid reader, credits a “fabulous high school English teacher” with encouraging her love of the written word. “She was the kind of teacher you want your kids to have,” she recalls. Then, about ten years ago, Hollon read what she describes as “the worst mystery on the planet” and thought she could certainly do better. She began writing on long business flights, joined “Sisters in Crime” (a support group for mystery writers), and became part of a critique group. She soon learned that “it’s easy to write, but difficult to write well.”

Ten years later, Hollon completed Pane and Suffering, her first novel.   “I know a lot about stained glass, and I know a lot of the people who own businesses in the Grand Central District,” Hollon says. “I thought combining my love of stained glass with writing would be a winning combination.” The book introduces Savannah Webb, a glass artist who returns to her family’s glass shop after her father’s unexpected death.  When her father’s assistant is also found dead, Savannah discovers a note from her father warning that she might be in danger, and she must decode his cryptic clues to find a murderer. “Savannah has all the attributes of an independent business owner,” Hollon explains. “She’s named after my favorite place. Savannah is a wonderful town with wonderful characters. It’s comforting, strong and proud of its heritage, all attributes shared by Savannah Webb.”

In Hollon’s second Webb’s Glass Shop Mystery, Shards of Murder (released on February 23, 2016,) Savannah judges an art festival in downtown St. Pete, and the winner is found dead in Tampa Bay. Savannah was the last person to see her alive.  Book three, Cracked to Death, was released on June 28, 2016. The story centers around a vintage glass bottle that may be connected to the treasure of the Gaspar pirates. The fourth book in the series, Etched in Tears, uses the Dali Museum as a backdrop to the death of Savannah’s high school sweetheart and prominent glass artist. It is scheduled for release on November 28, 2017.

“I’m trying to show readers what small business Florida is all about,” Hollon explains, “and what’s behind the beaches, t-shirts and shell shops – real people, families and a sense of community. It’s a tiny microcosm of civilization. Everyone works together so the community can succeed, and one bad apple can upset the whole thing. There’s a story in each of the stores.”

For more information, visit the author’s website at www.cherylhollon.com.