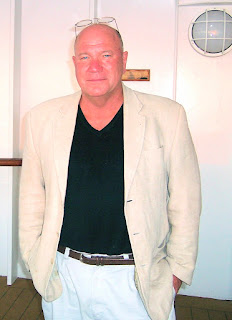 In 1987, the Tarpon Bay Marina in Sanibel closed its doors, and Randy Wayne White found himself out of a job.  After spending thirteen years as a fishing guide, White had to look for another line of work.  As it turned out, the marina’s loss was the reading public’s gain.


White moved to in 1972 and took a job working for the Fort Meyers News-Press.  He was impressed by the “complexities” of the state, and became fascinated by Florida’s social and natural history.  He also found himself drawn to the sea and eventually obtained his captain’s license.  Then he decided to purchase a boat and become a light-tackle fishing guide.
His experiences on the water inspired him to try his hand at writing. Although he had never formally studied the craft, he was an avid reader and credits “a wonderful library system” with helping him develop his skills.  “I always wanted to write,” he says.  “It was a calling.”  He was influenced by his favorite writers:  Conrad, Hemingway, Twain, Peter Matthiesen, John D. MacDonald, and John Steinbeck.  In fact, the inspiration for White’s Doc Ford came from a character in Steinbeck’s Cannery Row.  “I wanted to create a character that was purely analytical, not spiritual,” White explains. So he made Doc Ford a scientist - a marine biologist.
White started out writing several novels under the pseudonym “Randy Striker.”  So when the government closed to powerboat traffic, White decided to turn to writing full-time.  His first Doc Ford novel, Sanibel Flats, was published in 1990 and was chosen by the American Independent Mystery Booksellers Association as one of the “Hundred Favorite Mysteries of the Twentieth Century.”  Since then, White has published eighteen novels centered around the exploits of ex-CIA agent Doc Ford and his friends at Dinkin’s Bay.  In his latest, Night Vision, Doc Ford finds himself protecting a mystical Guatemalan teenager from the degenerate trailer park manager she can implicate in a murder. According to Booklist, “White handles the action scenes superbly, writing with both precision and dramatic flair, but he gets inside the heads of his characters, too…”
When it comes to writing, White does his job superbly.  A New York Times-bestselling writer, he has been awarded the Conch Republic Prize for Literature and the John D. MacDonald Award for Literary Excellence.  In addition to his Doc Ford novels, White has written several non-fiction works, many based on his extensive travels.  His non-fiction books include, Baitfishing in the Rainforest, The Sharks of Lake Nicaragua, Last Flight Out, and An American Traveler. The Gift of the Game, a PBS documentary that he wrote and narrated, won the “Best of Best” Award at the 2002 Woods Hole Film Festival.
White structures his novels in three levels.  As he explains it, “First, I try to write a fast story.  I also try to make a political or environmental statement. And then, there’s a spiritual level that I write for myself.  My readers can take from the story whatever they want.” He calls writing “the hardest work I’ve ever done,’ but loves it nonetheless.  According to White, “The best part of writing is reading something I’ve done and saying, ‘Gee, that’s pretty good!’”  He also enjoys having readers tell him how they’ve been affected by his works.  His biggest challenge is finding the time to write. “The impositions on my time are more than I’d ever imagined,” he says “People think that because you write, you don’t really work.  They don’t realize that even when you’re up from the typewriter pacing, you’re still working.”
White’s next Doc Ford novel, Chasing Midnight, will hit bookstores on March 6, 2012. White describes this as among the best of his thrillers. Set completely on Florida’s west coast, Chasing Midnight finds Doc Ford pitted against environmental extremists and the Russian mob.
When he isn’t writing, White enjoys reading non-fiction, traveling, boating, windsurfing, playing baseball, and socializing with friends at his restaurant, “Doc Ford’s Sanibel Rum Bar & Grill.”  He even dabbles in the culinary arts. “I cook all the time,” he says. “In fact, I do all the cooking at home.”  “Home” for White is an old Cracker house that sits on a Calusa Indian mound on the bay.  For the man who was named a Florida Literary Legend by the 2010 Florida Heritage Book Festival, this peaceful setting has inspired some of the most compelling novels in all Florida fiction.
For more about Randy Wayne White, visit the author’s website at http://www.randywaynewhite.com/

Julie Compton: The Story Behind the Story 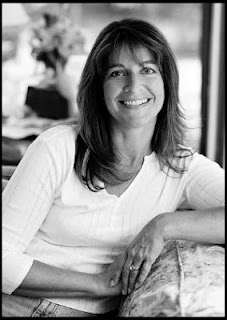 Julie Compton is fascinated by why people behave the way they do. This fascination has taken her from the practice of law to a career as a writer, culminating in two successful novels that combined elements of both.
Although Compton has been writing “as long as I can remember,” she never thought of making a career of it. She worked for private law firms until the birth of her second daughter when she began staying home with her children and writing seriously. Six years later, she resumed practicing law for a “dream job” as a trial attorney with the US Department of Justice that offered the privilege of working on some of the largest corporate bankruptcies in the country. She returned to writing full time in 2003 when her family moved to Florida for her husband's job.
The idea for her first novel, Tell No Lies, in which an assistant DA compromises both his professional and personal principles in his quest to become top DA, sprang from two separate incidents. “Back in '96 or '97, I heard a radio report about a politician who had been caught doing something unethical, and it got me thinking about what compels someone to do something so obviously wrong. Perhaps I'm too naïve, but I believe most people go into politics for the right reasons, but somewhere along the way they take a wrong turn. At about the same time, I read a newspaper article about a teenage boy who was involved in a crime of some sort – I don’t remember the exact nature of it. His mom claimed he was innocent despite what appeared to be  a mountain of evidence against him, and I found it so interesting how a parent could rationalize the evidence away. I put the two concepts together and wrote the framework for the novel.” Compton worked on the first draft for three years, spent another three years editing, and in 2008, Tell No Lies was finally published. Many critics have compared her to Scott Turow, and Kirkus Reviews gave it a starred review, calling it “a taut, tense cautionary tale complete with courtroom drama and a surprise ending."
Although Tell No Lies has been described as a legal thriller, Compton sees it more as a book about family and relationships. “When I started writing, I didn’t intend for it to be a mystery. I saw it as a relationship story with a mystery imbedded in it. I wanted to explore what makes a generally good person start sliding down the proverbial 'slippery slope'.”  After the novel's release, Compton was fascinated by how much of a lightning rod her protagonist turned out to be. Readers' reactions inspired her to write a sequel, tentatively called Keep No Secrets.
Compton finds it easier to balance her writing and personal life now that her children are older. She even finds time to volunteer as a guardian ad litem for neglected and abused children, a position which heavily influenced the themes of domestic violence in her second thriller, Rescuing Olivia, released in 2010.  Rescuing Olivia is the story of a Florida biker whose girlfriend disappears from the hospital after a motorcycle accident. In his quest to find her and save her life, he is forced to face the demons of his own past if he is to have any chance of saving Olivia from hers. Publishers Weekly called the novel "intense" and "entertaining," and Kirkus Reviews aptly labeled it a "[m]odern-day fairy tale" in which "Compton burrows . . . deeply into Olivia's and Anders' troubled back stories and dramatizes in such psychologically compelling terms the swain's attempt to rescue his princess." Compton hopes her readers will come away from her books realizing that “there’s always a story behind the story.” And that’s the story Compton wants to tell.

For more information, visit the author's website at http://www.julie-compton.com/