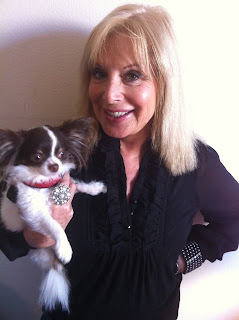 What’s a nice Jewish girl from Central Park West doing in a southern Chinese town teaching English to rowdy middle school students? The answer can be found in No Hugging in China, an entertaining memoir by St. Petersburg writer Felicia Brings. This sometimes funny, sometimes surprising book gives readers an insider’s view of life in the People’s Republic of China – and it’s certainly not what you’d expect.

For Brings, the road to China began in Manhattan. She grew up in New York City, started writing in junior high school, was the editor of her high school’s newspaper and earned a degree in English from New York’s Pace University. She co-authored a scholarly book when she was at Hunter College and wrote several articles that were published in newspapers across the country but never intended to become a full-time writer. “It’s not something I really enjoy,” she admits. “I’m very social, and sitting alone in front of that blank page is very challenging. As a writer, your ego is out there to be splayed open. I always say I’ll probably never do it again – but I probably will.”

So Brings became a teacher. She taught writing at Monterey Peninsula College in California and at Laboratory Institute of Merchandising in New York City.  She also spent ten years leading corporate seminars for Fortune 100 companies. But everything changed one day when she and a friend, Susan Winter, were having lunch. “We both had younger boyfriends, and we were talking and giggling about some of our experiences,” she recalls.   “At some point, one of us said we should write a book. So we did.” At first, they intended to write about their own exploits. Soon, however, they realized there were lots of women with similar stories, so they decided to start interviewing them. The result was a groundbreaking book – Older Women, Younger Men: New Options for Love and Romance – published in September, 2000.

An exploration of relationships that were often considered taboo, Older Women, Younger Men became wildly popular and is a source of pride for Brings.  “Back then, the term ‘cougar’ hadn’t entered the lexicon and most of these relationships were furtive,” she explains. “This was something men had done for ages, but women couldn’t. I’m pleased and proud that I contributed to ending that nonsense.”

Seven years later, Brings was approaching her sixtieth birthday and ready for an adventure. Dreading another icy New York winter, she decided to answer an ad recruiting English instructors to teach in China’s Guangdong province, an area with a sub-tropical climate.  The ad promised a six-month contract teaching adults at the Bridge Language Institute in “China’s Garden City.” What Brings discovered when she arrived was something completely different. She was assigned to a middle school in the industrial town of Xiaolan where she faced rebellious students, rampant pollution, a scarcity of toilet paper, crazed drivers and government corruption that would make the IRS blush. A tumultuous six months later, Brings returned to the United States with an abiding admiration for the Chinese people and enough experiences to fill a book. She combed through the emails she’d sent during her stay, and in February, 2012 published No Hugging in China, a memoir chronicling her adventures (and misadventures) in Xiaolan. “China is an amazing place,” she says. “It’s colorful, fascinating and wonderful, but there’s a lot or corruption. I hope the book will show how that impacts the lives of everyday people.”

In 2012, Brings published China Tips (or a Blonde’s Guide to Teaching in China, a 25-page compendium of practical advice for any Westerners entertaining the idea of traveling or working in China. She hopes the book will assist Western tourists in navigating the customs, manners and mores of the Chinese people. According to Brings, “China Tips tackles the pressing issues most travel books don't address, like where to find coffee, how to use a lazy susan in a restaurant, what toilet paper is for, etc.”

Brings’s three favorite things about Florida are “Weather, weather and weather.” She enjoys shopping and jogging with Oliver, the long-haired Chihuahua she calls “the light of my life.”  She is currently working on a screen treatment of No Hugging in China that she hopes will be optioned for Chinese television. “I’ve never written a screenplay before,” she admits, “so I’m flying by the seat of my pants, which I always do. It’s worked out so far. I hope it will again.”