Writing What You Know - A Guest Post by Joanna Campbell Slan 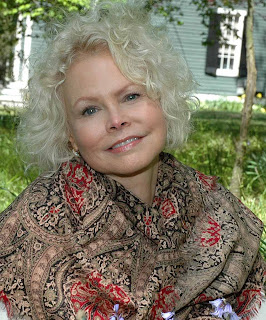 This month, Fabulous Florida Writers welcomes guest blogger Joanna Campbell Slan. Joanna is the award-winning author of twenty books, including three mystery series. Her new book, Wave Good-Bye, will be released in March. Joanna  was our featured writer on August 9, 2012.

When my agent asked me if I’d be interested in working on an existing series and writing under the pen name of “Lila Dare,” I hesitated.  I was already busy with two series—the Kiki Lowenstein Mysteries and The Jane Eyre Chronicles. But that said, I’m always up for a challenge. So I gave my agent a firm, “Maybe.”
That “maybe” quickly turned into a “yes” when I heard more about the Southern Beauty Shop mystery series. The books are set in fictional St. Elizabeth, Georgia. The protagonist, Grace Ann Terhune, is a sassy, thirty-something divorcée who works for her mother, Violetta, owner of the eponymous Violetta’s. Grace Ann is the very definition of a GRITS, a Girl Raised In The South.

Grace Ann and Violetta struck a familiar chord in me. My mother grew up in Georgia. When I close my eyes, I can hear Mom talking as I write dialog for the Terhunes. I learned how Southerners think at my mother’s knee. And I live in Florida, which I consider the South, even though some people don’t.


Researching the beauty business wasn’t a problem. My grandmother owned a beauty shop in rural Illinois. I loved visiting it. The whirl of activity in the salon always intrigued me. The atmosphere was uniquely feminine. I tried to evoke that intense feeling of female camaraderie in the book.
Capturing the essence of Grace Ann was easy because I come from a family of three girls, and I’ve always written about strong women. We’re six books into my Kiki Lowenstein Mysteries and two into The Jane Eyre Chronicles; both series feature women of substance. I don’t believe in victimhood, although I do like my characters to have both flaws and a backbone. Grace Ann is much more assertive than Jane Eyre or Kiki Lowenstein, but she also has her doubts about herself.


I think the toughest part of my new identity will be signing books under an assumed name. Or responding if readers call me “Lila.” I hope to get a lot of practice with both at the launch party for Wave Good-Bye. Fittingly, we’re holding the event in a hair salon!
What seemed like a challenge at first has turned out to be a lot of fun. Recently, my accountant gave me another reason to be pleased with my decision to morph into “Lila Dare”--now I can write off all my hair appointments!

Next: Doug Eadie - A Light in the Darkness
Posted by Jackie Minniti at 11:46 AM 6 comments: 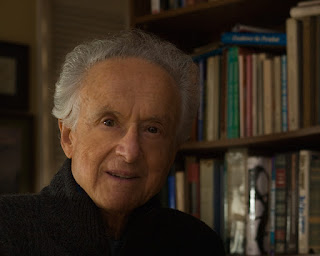 Note: Sadly, Joseph Eger passed away suddenly in December at the age of 93. He was not only a Fabulous Florida Writer but a wonderful humanitarian and exceptional human being.

Joseph Eger’s life was shaped by two overriding passions: his transcendent love of music and his fascination with the science of physics. This may seem like an unusual combination, but it mirrors Eger’s extraordinary life and serves as the inspiration for his fascinating book, Einstein’s Violin.


Eger, a resident of Pompano Beach, grew up in an Orthodox Jewish family in New York City.  Even as a young boy, he had an insatiable curiosity about the world around him and a strong sense of justice and injustice. He studied horn at the renowned Curtis Institute in Philadelphia, living what he called “la vie Boheme” with three other music students in a one-room apartment. It was during his student days that Eger was introduced to the world of progressive politics and became a social activist. This began what Eger described as “a lifetime quest toward finding ways to harness the mysterious power of music and related arts for social change… To my delight, I found that music, physics, and social change are inexorably locked arm-in-arm.”


After graduating from Curtis, Eger took a position as first French horn for the summer season of the National Symphony in Washington, DC. He then played the same position in the New York Philharmonic and later the Los Angeles Philharmonic before embarking on a career as a solo artist. He spent several years touring the world, and was lauded by the New York Times as “the greatest horn player alive.” Then came the event that proved to be a turning point in Eger’s career. He enrolled in a conducting class under the direction of Pierre Monteux, one of the greatest conductors of the twentieth century. After seeing Eger’s performance, Monteux said, “Give me a few years with him, and he will become a great conductor.”


When Eger returned to New York City, he began searching Julliard and other music conservatories for students who might be interested in joining his orchestra. Eger’s Westside Symphony (which later became the New York Orchestral Society) performed its debut concert to rave reviews. From then on, he was hooked. In 1974, the group morphed into one of Eger’s proudest accomplishments– the Symphony for United Nations (SUN).  Dedicated to “harnessing the power of music for constructive global change,” SUN is a non-profit organization that holds concerts, festivals, and concert-seminars which have raised substantial funds for humanitarian causes. The list of participants in SUN events reads like a “Who’s Who” of the entertainment world – Marvin Hamlisch, Bianca Jagger, Peter Gabriel, Bette Midler, Tony Randall, Ellen Burstyn, Michael Moriarity, and Eli Wallach, to name a few.  In 1994, Eger’s contributions to music and social causes earned him the Eleanor Roosevelt “Man of Vision Award” (one of only two worldwide).


Despite his stellar musical talent, Eger’s career path was sometimes rocky. His political activism caused him to be blacklisted during the McCarthy era. During these difficult times, Eger found inspiration in one of his heroes – Albert Einstein. “Einstein’s example of a man who was at once a scientist, musician, and principled citizen gave me encouragement,” he explained. Eger found it ironic that the very thing that threatened his career in the 1950s was something he was later congratulated for.  But it is this same commitment to social change that inspired his most radical idea yet.


Eger had a longstanding interest in physics. Although he never studied it formally, he admits that books on relativity and quantum physics were often included in his bedtime reading. He began to discern connections between these subjects and his feelings about music and society. Old ideas were being challenged by discoveries in quantum physics and string theories. He realized that the outdated Newtonian concept of a fragmented universe was making people lose sight of the connections between them. “Everything in the universe is made of exactly the same stuff, and that stuff, believe it or not, is music," he explained. "The only difference between you, a stone, and the king of Saudi Arabia are variations in the configuration of the wave frequencies of which we are constructed. The universe is one, but we have divided it. Music has the wonderful facility of bringing it back together.” When an editor heard about Eger’s theory, he approached the conductor about writing a book. Eger was pleased with the opportunity to share his ideas about the power of music, and Einstein’s Violin was born.


Part memoir, part scientific journal, and part collection of historical vignettes, this eminently readable book outlines the experiences and ideas that led Eger to his revolutionary insight about music as an agent for social change. He presents the symphony orchestra as a metaphor for both society and the entire universe. According to Eger, “Music is an ‘open sesame’ to people and their souls. In an orchestra, whatever personal differences may arise are set aside in the interest of harmony. Music brings people together. There is something fundamental about music that is essential to being human. My book is a polemic for a better, more caring, just world; hence, a more peaceful world.” In Einstein’s Violin, readers are treated to an intimate portrait of the two men Eger admire most: Einstein and Beethoven. They are also given a fascinating glimpse of some of the celebrated figures that have crossed Eger’s path - people like John Lennon, Yoko Ono, Leonard Bernstein, Keith Emerson, Queen Noor, Yehudi Menuin, Arthur Rubinstein, and Leopold Stokowski. The Pittsburg Post-Gazette praised Einstein’s Violin as a book that “harmonizes music, science and humanity.”


Although Maestro Eger was in his ninth decade of life, his commitment to music and social issues showed no signs of diminishing. He was Music Director/Conductor of the Symphony for United Nations (SUN) in New York and Florida, and Guest Conductor for Life in Beijing, China. In 2010, he was named Director of Music and Cultural Affairs for the International Agency for Economic Development, an organization dedicated to improving the economies and standards of living in developing countries through intelligent charitable, economic and social projects. He also kept busy writing essays and articles that promoted his dream of music as a force for unity. “My hope would be that readers would realize they’re living as part of a huge symphony orchestra,” he said “To make beautiful music for themselves and their families, they have to find ways to get along with their brothers and sisters, since we are all one.”