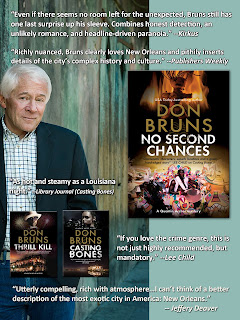 This month, Fabulous Florida Writers is pleased to welcome guest blogger Don Bruns. In addition to being a USA Today bestselling author, Don is a songwriter, musician and advertising executive. He is the author of three mystery series: the Stuff mysteries, Mick Sever Caribbean mysteries, and Quentin Archer mysteries. He was our featured writer on December 5, 2013.

Several years ago, I received an email from a production company in L.A. They were interested in a series I was writing about two 24 year-old private detectives in Miami. Stuff To Die For had caught their eye. So we sent them the seven book series and within a week, the producer calls back.

It was true. One boy's father had run afoul of the law and the two young men felt he’d been mistreated, so they had a sour taste in their mouths regarding cops. I questioned why that fact colored the humorous mystery series.

“Because the current crop of television shows feature ‘fish-out-of-water’ types who work with the cops. Castle, Bones, Psych, The Mentalist…”

There was silence on the phone. Finally, I spoke up.

“Well, they’ve changed their minds. Now they like the cops.”


I didn’t. But my mind went into overdrive. A fish-out-of-water type that worked with the cops?

“How about a voodoo practitioner who works with a homicide cop in New Orleans?”


I seriously have no idea where that came from. “He’s been forced out of Detroit for going Serpico about a drug ring that was run by the police. He ends up in The Big Easy and this lady approaches him, telling him something she knows about a case he’s working on.”


“Her mother was a voodoo queen, but now has dementia. She lives in a dementia center down by the Mississippi. This girl volunteers there to be close to mom and starts hearing voices of some of the patients who can’t talk. One of them gives her a description of a murder he was involved in.”

Now this producer is salivating.

“I love this! Get me a three-page treatment. Everything you can think of. Voodoo, New Orleans, this could work.”


So I did what I knew how to do. I wrote the book. Casting Bones came out last June from Severn House. Booklist said “Bruns’s book has a nice sense of the creeps.” Lee Child said “If you love the crime genre, this is not just highly recommended, but mandatory.” And, Library Journal praised the book saying “As hot and steamy as a Louisiana night, this series debut hits all the right notes with the evocative Big Easy setting, colorful and memorable characters and a smartly twisty plot. Bruns uses all of his considerable talents to cast a spell over the reader.”


Considerable talents? I’ll take that.  This past June, the second in the series released. Thrill Kill was covered by Publisher’s Weekly, who said “Bruns brings the chaotic frenzy of Mardi Gras to life.” And this March, number three comes out. No Second Chances, according to Kirkus, “Combines honest detection, an unlikely romance, and headline driven paranoia.”


It’s great fun to write about New Orleans, and it’s eye opening to explore themes like human trafficking, corruption in the prison system and the Black Lives Matter movement.  And, guess what. A production company at CBS called. They are interested in exploring a TV series and I signed a contract with them in January. Stay tuned.

For more information, visit the author's website at www.donbrunsbooks.com
Posted by Jackie Minniti at 2:09 PM 3 comments: 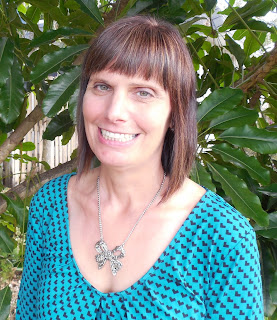 Most people wouldn’t associate a classroom with murder and mystery, but that’s because they’ve never read a book by Diane Weiner. This Coral Springs writer has used her 30-plus years in education as the inspiration for The Susan Wiles Schoolhouse Mysteries, a delightful series of cozy mystery novels featuring a plucky retired schoolteacher with a penchant for sleuthing.
Weiner has loved reading and writing since she was a child in New York. After graduating from the University of North Carolina with a degree in music, she married and moved to Oklahoma with her husband, Robert.  She decided to become certified in teaching and earned a Master’s degree in Educational Leadership and a Ph.D. in Teacher Leadership.  She taught grades 1,2, 3 and elementary school music. After teaching for five years at an American school in Mexico City, she relocated to Florida where she now teaches Earth Science at Millennium 6-12 Collegiate Academy in Broward County.

It was while working on her doctoral dissertation that she decided to try her hand at writing a book. “I kept thinking about how much fun it would be to write without having to worry about bibliographies and citations,” she says. “I also started writing so I’d have something to do after I retired.” She chose the mystery genre because she enjoyed Nancy Drew mysteries and Mary Higgins Clark’s novels, but her tendency to scare easily and have nightmares made her decide to write cozies – mystery stories without gore, graphic language or violence.  She submitted her first novel, Murder is Elementary, to Cozy Cat Press because she liked their name and was thrilled when they offered her a contract.
Murder is Elementary introduces Weiner’s signature character, Susan Wiles, a retired teacher who finds the body of the school’s principal when she returns to her old school for the holiday concert. Susan decides to help the local police, one of which is her daughter, Lynette, while they investigate the crime. Weiner admits Susan is like her in some ways. “Susan looked forward to being retired and being a grandma, and she likes to solve puzzles,” she says.  “But she’s bolder and braver than I am. I enjoy being able to get inside Susan’s head when I’m writing because it’s like living the life I’d like to live.”
Murder is Elementary was followed by nine more mysteries featuring Susan Wiles – Murder is Secondary, Murder in the Middle, Murder is Private,  Murder is Developmental, Murder is Legal, Murder is Collegiate, Murder is Chartered, and Murder is Homework.  The seventh book in the series, Murder is Collegiate, is set in the town of Sugarbury Falls, Vermont. It is currently on the short list for the Chanticleer Murder and Mayhem Mystery awards. It inspired a spin-off novel titled A Deadly Course which won an Eric Hoffer Book Award and is the first book in a new series, The Sugarbury Falls Mysteries.
Weiner’s latest release, Murder, of Course, is the second of the Sugarbury Falls Mysteries. Middle-aged couple Henry and Emily Fox have gotten custody of a teenage daughter, Maddy. While struggling with first time parenthood, Emily and Henry help solve the murder of a young lawyer who was renting their neighbor’s cabin. The motive is elusive, with a surprise ending that ties loose ends together. Weiner is currently writing Book 3 in the new series, Clearing the Course, and then back to another Susan Wiles mystery.
Since her first series involves schools and teachers, it shouldn’t be surprising that Weiner hopes her books will teach readers a valuable lesson. “I hope Susan shows readers that you can be productive at any age,” Weiner says. “There’s life after retirement, and it’s never too late to reinvent yourself. And kudos to Emily and Henry Fox for semi-retiring while in their fifties and reinventing their lives with mysteries to solve and new challenges to conquer, including raising a teenager. It’s never too late to take a new road in life.”
For more information, visit the author’s website at www.dianeweinerauthor.com or visit her Facebook page at dianeweinerauthor.

Posted by Jackie Minniti at 11:33 AM No comments: