Inspiration is Everywhere - A Guest Post by Diane Weiner 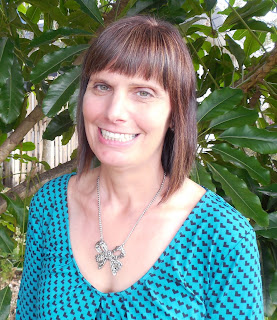 Note: This was supposed to post on Sept. 15. Due to a technical glitch, it did not publish publicly. I am reposting it today. Apologies to Diane!

This month, Fabulous Florida Writers is pleased to welcome guest blogger Diane Weiner. Weiner is a former teacher turned mystery writer who is the author of eight Susan Wiles Schoolhouse Mysteries and three Sugarberry Falls Mysteries. Her latest book, Clearing the Course, was released in June. Weiner was our featured author on March 2, 2018.

As an author, one question I’m often asked is, “Where do you get your ideas?” I have to admit that when I started writing the Susan Wiles Schoolhouse mysteries, I feared the well running dry. Fortunately, twelve books later, the ideas are still flowing.

My first book, Murder is Elementary, started with an image. At the elementary school where I taught, an administrator wanna-be, plied our principal with baked goods (you know the type). He’d often come into her office bearing the likes of Black Forest Cake. What if he tried to poison her and get her out of the picture? Hmmm… a frosted cupcake with fun-fetti sprinkles on the principal’s desk… tooth marks in the frosting…a body collapsed on the floor. What if the newly retired music teacher attended the school’s holiday concert and the principal went AWOL? Knowing as all music teachers do that the show must go on, she hunts for the missing principal, making her way into that office.

Throw into the mix the fact that the principal’s daughter was one of Susan’s favorite students. Add a detective daughter into the mix for conflict, and oh, remember the wanna-be baker? A prime suspect. Now I had the backbone of my story.

Other images became seeds for subsequent books. A dead bookkeeper with papers strewn all over the floor of her office was the start of Murder in the Middle. Being a runner who is often out before the sun comes up, I scare myself. A lot. By the way, this is why I write cozies and not thrillers. Listening to spooky ads for Halloween Horror Nights on my antiquated Sony headphone radio left me imagining stumbling over a dead body (or becoming one), as in A Deadly Course.

If I’m stuck for an idea, I look to the news. After all, I do live in Florida! The Stand your Ground law factored into Murder is Private. A story about babies taken from teen mothers and sold on the black market was the impetus for the Georgia Babes storyline in Murder is Legal.

Finally, I believe that places we’ve been and experiences we have are woven into us. I was inspired to write the Sugarbury Falls series because while in high school, my best friend’s grandparents lived in a log cabin in Vermont. Visiting them with her family made a lasting impression. I still visualize the lake and the barn and remember that her grandmother snow- shoed in the winter.

I grew up in Highland, New York, a small town not far from the big city. Westbrook is a resort style version of my hometown with a house that looks like my former home in Tamarac, Florida. Oh, and that town sprouted a Starbucks and a giant Barnes and Noble when I needed them.

Favorite spots are fun to incorporate into writing, even if they become a juxtaposition of several places. When I was younger, I dreamed of opening a school for performing arts. One of my favorite Florida spots is City Place in West Palm Beach. The Dreyfoos School campus is the model I used for the performing arts school in Murder is Private, except in the book it is right on the ocean, with a pier and a light house! It’s fun writing in a world that you love and can keep tweaking until it’s exactly where you want it to be.

Currently I am writing Murder is Medical, which takes place in St. Louis. My son lives there. When I’m writing about Forest Park, the cat café, or Match Day at Washington University Medical School, it makes me feel closer to him.

Growing up, reading transported me to so many places and experiences. Now, writing does the same. Ideas are all around us, ready to be woven into stories uniquely crafted through our own set of eyes.

For more information, visit the author's website at www.dianeweinerauthor.com

Posted by Jackie Minniti at 2:48 PM No comments: 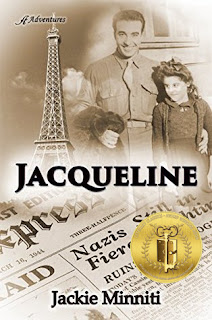 FOR A LIMITED TIME ONLY!
Amazon is offering my novel, Jacqueline, at half-price! This is the perfect back-to-school book for your favorite young reader. Get your copy TODAY! 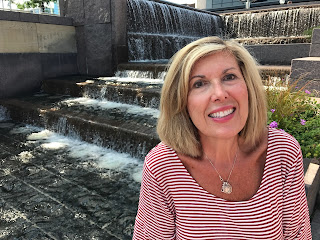 Five years ago, Dana L. Brown had an epiphany. She’d been reading a book and decided she could write one like it. While biking with her husband, a complete story came into her head. It was then that she told her husband she wanted to retire from her 32 years as a regional bank manager and write a novel. Her husband convinced her to wait a year, which she did, and in 2017, Brown joined the ranks of romance writers with her first published book.

While Brown has no formal training as a writer, she's always loved reading and liked to write “for fun” when she was younger. In 2003, she joined a writer’s group hoping to hone her skills. “I loved it,” she says. “They had a writing contest, and I came in second. But I had young kids and was busy with my job, so I set it aside.” As her children grew and she advanced at work, she never lost her desire to write, and in 2016, with a now-empty nest, she left her day job and began working on her debut novel, a contemporary romance titled Lottie Loser.

“I was inspired by Liliana Hart’s books,” Brown says. “I love her characters, and I wanted to write a book like those.” She admits that writing Lottie Loser was easy for her. “The opening scene was just there,” she recalls. “As I’d ride my bike, new scenes would come into my head.”  The main character was inspired by the protagonists in other novels Brown had read. “Lottie’s strong, but also kind and loving,” Brown says. “I love her integrity and the way she cares for her friends.” One trait Brown and her character share is their struggle with weight. “I’ve struggled with food my whole life,” Brown says,  “so I decided that Lottie would have that issue. But her story is not my story. I like to think of her as me with a lot of upgrades.”

Set on Anna Maria Island, Lottie Loser chronicles the life and loves of Charlotte “Lottie” Luce.  Switching between past and present, the story follows Lottie’s development from insecure, overweight teenager to the slim, stylish president of Olde Florida Bank. Her new life is upended by the return of Nick Greyson, the man she has secretly loved since childhood, who comes home to help save his father’s business. The book was named a semi-finalist in the Royal Palms Literary Awards given by the Florida Writers Association.

Encouraged by the response to Lottie Loser, Brown decided to pen a sequel. Call Me Charlotte, published this year, has Charlotte trying to mend her broken relationship with Nick. “I like to stress the empowerment of forgiveness,” Brown says. “Charlotte’s refusal to forgive impacted the next twelve years of her life. When she realizes the power that comes when she forgives, it opens up a whole new world.” Call Me Charlotte received the gold medal for romance from the Florida Authors and Publishers Association.

Brown has recently completed The Greysons, the third in what she calls The Anna Maria Island Series. “The characters had so much to say, the first book became a second, then a trilogy, and maybe more.” She is also at work on a stand-alone novel about an older woman bemoaning the loss of her youth. “I love the creativity involved in writing,” Brown says. “It’s such fun to make up characters and give them backstory. I love using my imagination to make up stories, and I love reading them.”

For more information, visit her website at www.danalbrownbooks.com.
Posted by Jackie Minniti at 5:14 PM No comments: