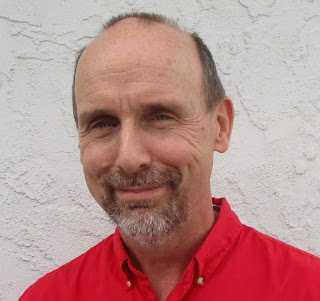 This month, Fabulous Florida Writers is pleased to welcome guest blogger Russell James. James is the author of 14 nail-biting thrillers and 8 short story collections. His latest release, Curse of the Viper King, is the third in his Grant Coleman series. James was our featured author on August 1, 2017.

My latest release is Curse of the Viper King. Set in the Amazon, it follows the adventure of paleontologist Professor Grant Coleman and environmental activist Janaina Silva as they try to find their way home. They discover an isolated logging camp, and the chance to hitch a ride back to civilization.

But the workers uncover a fossil of a giant snake, almost fifteen meters long. Grant is thrilled, but the superstitious workers believe they have let loose a demon.

That night, the world begins to unravel. A mysterious creature attacks the camp, kills several men, and sinks the only boat that can get them home. Soon Grant and the others are in a battle against colossal spiders and a descendant of that great fossilized snake. The key to survival might lie in the lost pyramid of the Aztec Viper King, hidden deep in the rain forest. But they need to get there alive, and one member of the crew has an agenda that doesn’t include Grant and Janaina ever getting home.

This is Grant Coleman’s third adventure, following his encounters with giant scorpions in a cave sealed for ten thousand years in Cavern of the Damned and his exploration of a dinosaur-infested plateau in Monsters in the Clouds. He doesn’t have the best of luck in making travel arrangements. All the stories are self-contained, like Indiana Jones movies, so you can read any of them without reading the others.

I’ve written a lot of horror novels, some pretty graphic. I attend a lot of horror conventions, and frequently have kids ask their parents if they can buy one of my books. I have to wave them off from some of the hard-R rated stuff. But I can direct them to the Grant Coleman series from Severed Press. They are not written on a kid’s level, but they don’t have any language or sex, and the violence is all Jurassic Park monster stuff. Fun for the whole family!

All the Grant Coleman books have some kind of giant monster in them. All are based on real life animal that are much smaller. The Afterword in each book tells you just how close the fictional one comes to the factual. It’s fun to let people in on how strange some real life animals are.

My next release will be The Playing Card Killer from Flame Tree Press in February 2019. This one is a thriller about a serial killer loose in the Tampa Bay area. Floridians might recognize a lot of locations in that one. Stay tuned for a update as that time draws near.

For more information (and some free short stories), visit his website at http://www.russellrjames.com
Posted by Jackie Minniti at 12:12 PM No comments: 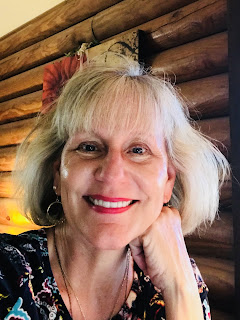 If you enjoy books with strong, independent female protagonists, Marty Ambrose is a writer you won’t want to miss. This Pine Island novelist has penned eight books that feature women who live life on their own terms. “I like writing about women who challenge the status quo,” Ambrose says. “I’ve always been interested in how they do this.”

A St. Louis native, Ambrose had dreamed of being a writer from her earliest years. “I’ve always had a love of language, and I started writing little stories in elementary school,” she recalls. “Later, I fell in love with the classic writers, especially Edgar Allen Poe. Something about him made me want to write like him. Maybe it’s because we share the same birthday.” After earning her undergraduate degree in English from the University of Missouri, Ambrose traveled to the United Kingdom to pursue graduate studies at the University of York.

It was during her three years abroad that her parents retired to Florida. “I came to visit and loved it,” she says. She inquired about teaching positions at Florida Southwestern State College and was offered a job. This was the beginning of a thirty-year teaching career and established Ambrose as a full-time Floridian. “I love the laid-back lifestyle and being able to enjoy the outdoors year-round,” she says, an enthusiasm she shares with her husband, former news anchor Jim McLaughlin, and Mango, a 90 lb. German Shepherd who happens to have an appetite for Pine Island mangoes.

Ambrose embarked on her writing career fifteen years ago with a romance novel titled Engaging. She followed this with a second romance, Heat Wave, before deciding to change course. “There are two parts of me,” she explains. “There’s the humorous side and there’s the romantic side that’s more intense and emotional.” Ambrose decided to explore her lighter side with Perils in Paradise, a cozy mystery set in Florida that introduced free-spirited Mallie Monroe, a journalist with a penchant for solving murders. Perils in Paradise was the first of five Mango Bay Mysteries: Island Intrigues, Murder in the Mangroves, Killer Kool, and Coastal Corpse. “The Mango Bay Mysteries were fun,” Ambrose says. “I enjoyed writing them.”

Ambrose’s latest novel came as an outgrowth of what she describes as the worst year of her life – a time when she thought she’d never walk again. In 2015, she suffered a serious back injury. A usually active woman with a passion for long-distance biking, Ambrose found herself housebound for three months awaiting surgery. “I realized that when you’re injured, everyone’s life goes on without you,” she says. “So I read. A lot.” One of the books she read was The Young Romantics. In the book, she came across a small excerpt from the journal of Claire Clairmont, the forgotten stepsister of Mary Shelley, author of Frankenstein and wife of poet Percy Bysshe Shelley. Intrigued, Ambrose began reading more about her.  “Claire was peripheral,” Ambrose explains. “She was left behind by the people who were most important in her life. It all coalesced for me.” It was then that Ambrose decided to give her a voice.

Claire’s Last Secret, a novel Ambrose describes as historical women’s fiction, takes readers on a fascinating journey through time to the “Haunted Summer” of 1816, a period that produced two seminal horror tales – Mary Shelley’s Frankenstein and John Polidori’s The Vampyre. During this summer, Claire became pregnant by Lord Byron, the love of her life. The story, told from the perspective of an elderly Claire, shifts from 1873 to 1816 where she relives the events of that momentous summer and uncovers a secret that rocks her to her core. Publishers Weekly praises the book as “…most effective as a study of a young woman who takes a huge risk with her body and soul and spends the rest of her life dealing with the consequences.”

Ambrose’s meticulous research was made possible by a grant from Florida Southwestern State College that enabled her to travel to Geneva and Florence in 2016, which was the 200th anniversary of The Haunted Summer. While there, she was able to see Bryon’s actual letters and the original manuscript of Frankenstein. “I’ve studied the Romantics most of my life,” she says. “I thought I knew them, but I didn’t really until I made them characters.”

What began as a stand-alone novel has now become the first in a trilogy. “It started as a story, but then it took on new aspects,” Ambrose explains. “It deals with the interconnectedness of life and the way our past dominates how we live in the present.” The next installment, A Shadowed Fate, is half-finished and scheduled for release in 2019. “The Trilogy will take Claire on an odyssey of love and redemption,” Ambrose says. “The second book will tell more about her journey and how she heals from her past.” Ambrose will be spending two weeks in Italy doing research and serving as a panelist in the Women’s Fiction Festival.

Ambrose hopes readers will enjoy reading about women who live outside the box. “What I enjoy most about writing is creating characters,” she says. “They become so real to me. It’s such a  joy. I love it!”


For more information, visit the author’s website at www.martyambrose.com.

Posted by Jackie Minniti at 1:13 PM No comments: 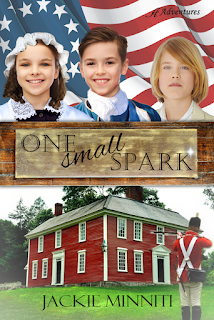 The big day has finally arrived - Release Day for my new novel, One Small Spark! Now available through Amazon in paperback or Kindle.
Here are the links if you want to check it out: