According to best-selling novelist James Grippando, “Lawyers are natural storytellers – and I mean that in a good way.” His journey from courtroom to writer’s desk began in 1988. A University of Florida graduate, Grippando was five years into a promising legal career when he decided to write a novel in his spare time. He’d caught the writing bug from his mother (whose doctoral dissertation became a top nursing textbook), his high school English teacher (who taught him that good writers, must be voracious readers), and Sid Homan, head of the University of Florida’s English Department. Six years and one failed manuscript later, The Pardon was published. Its success launched Grippando into the ranks of full-time novelists.

The Pardon introduces Jack Swyteck, Miami defense attorney and estranged son of a Florida governor. Grippando credits his experience at Florida's 11th Circuit Court of Appeals, "Court of Last Resort" for death row inmates, with inspiring the story. "Every so often, a case would make me wonder: What if this guy is innocent? That sounded like a good premise for a novel." While Grippando claims that he is not Jack Swyteck, he admits to some similarities. "Jack is a sole practitioner. I sometimes feel that way since writing is an isolated existence. Jack also tries hard to do the right thing and sometimes needs a friend to shake him and tell him to have fun." Grippando describes his character as "someone I'd like to hang out with rather than someone I'd like to be."
Since the debut of The Pardon, Grippando has published 17 novels he describes as "thoroughly researched suspense with a twist." These include nine Swyteck books, eight stand-alone novels, and Leapholes, a novel for young adults. The story of a magical old lawyer who goes into law books and travels through time to revisit landmark cases, Leapholes is "a book that will teach kids that the law is based on real people."
Grippando's newest release, Afraid of the Dark (March 2011), has Jack Swyteck in his most dangerous case yet. To prove that his client didn't murder his girlfriend, Swyteck will not only have to prove that, at the time of the crime, his client was being interrogated as a suspected terrorist at a CIA "black site," he will also have to establish something the government steadfastly denies: that the site ever existed. The plot stretches from black sites to the dark side of cyberspace. The Associated Press calls Afraid of the Dark "a compelling thriller that has more twists and turns than a snowy mountain pass." Grippando's legion of readers must agree, because after just five days of sales, Afraid of the Dark debuted on the New York Times Bestseller list.
Although Grippando spends over six hours a day “writing outdoors under an umbrella,” he has also taken a part-time position as counsel with the David Boies firm to “stay plugged into the legal community.” While he misses the camaraderie of law practice, he loves having the freedom to explore different subjects. He also enjoys being able to golf, cycle, and spend time with his wife, Tiffany, and their three children.
Grippando has already finished his 2012 release. With the success of Money to Burn (2010), Grippando returns to Wall Street, where, he says, “there are no shortage of villains.” He hopes his books will “stimulate some thoughts about serious subjects.” But above all, he wants his readers to have fun.
For more about James Grippando, visit his website at www.jamesgrippando.com
Next: On the Job with Elaine Viets
﻿
﻿
Posted by Jackie Minniti at 4:27 PM 1 comment: 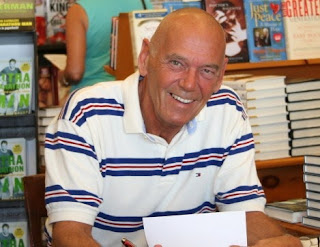 When a friend suggested he write a romance novel, Dr. William Emener was intrigued. As a Distinguished Research Professor Emeritus at the University of South Florida – Tampa, Emener had written countless professional papers and journal articles. At the time, he had also published more than 20 books, but all were non-fiction: textbooks, pop-psych, and self-help books based on his 40 years of experience as a teacher, counselor and psychologist. Though he was justifiably proud of his work, there was a creative part of him that yearned to use words to paint pictures and touch human emotions. But romance novels?  Even though he’d spent a good deal of his professional life dealing with the intricacies of interpersonal relationships, Emener had to admit this was quite a leap.
As a research professor, he decided to do some research. He began reading romance novels.  As he read, he discovered a way to use the genre as an instructional tool.  “I realized that none of the books I’d read addressed deeper psychological issues,” he says. “So I decided to take the basic aspects of adult loving relationships and build them into a novel. I could include the typical romance novel concepts, then delve deeper into some of the underlying psychological aspects.”  This was the premise for My Sweetpea: Seven Years and Seven Days, the story of a couple struggling with the end of a seven year marriage. The novel also explores the personal issues each character brought into the marriage that doomed it to failure. This was followed two years later by Fear of Feeling Loved, the tale of a woman whose “commitment phobia” causes her to sabotage her romantic relationships. Emener’s latest book, If Ever Again… It’ll be for Love, deals with a newly-divorced mother trying to balance her need for love with her desire to protect her little girl. Last month, all three novels became available as e-books (in Kindle format from amazon.com and in e-Pub format from barnesandnoble.com).
Emener describes his books as “more than pedestrian level romance novels.” His biggest writing challenge was creating characters that readers could invest in emotionally. “It was difficult to tell the readers what I wanted them to know about a character and still allow them to make the story theirs,” he explains. “To make the reader identify with a character, I have to leave something out so the reader can fill in the blanks. To use a jazz metaphor, a good song has some notes missing so you have to fill them in yourself. Then you become part of the music.  I want my characters to become part of the reader’s life.”
Emener is currently at work on his fourth novel, tentatively titled Rainout, a mystery/romance that will be published sometime next year. When he isn’t writing, this recent retiree enjoys fishing, boating, golf, riding his Harley, and pitching on a co-ed softball team. The New Jersey native also loves basking in the sunshine at his St. Pete Beach home. But one of his biggest thrills is to hear that his books have made a difference in someone’s life. “My hope is that my books can impact a reader’s life for the better. When someone reads one of my books and says, ‘Wow! That really got to me,’ it makes it all worthwhile.”


For more about Dr. Emener, visit his website at http://www.emenerbooks.com/


Next: James Grippando - Lawyer as Storyteller
Posted by Jackie Minniti at 1:34 PM No comments: