The Heretic of Granada - A Guest Post by Dr. David Edmonds 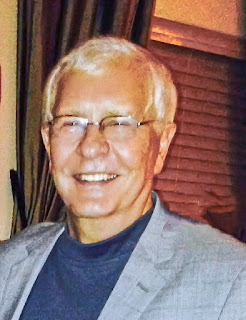 This month, Fabulous Florida Writers is pleased to welcome guest blogger Dr. David Edmonds. His first book, Yankee Autumn in Acadiana, won the top literary award of the Louisiana Library Association. His thriller, Lily of Peru and the Spanish version (Lirio del Peru) is the recipient of numerous first or second-place literary awards, including three International Latino Book Awards for fiction.
The Girl in the Glyphs, a romantic thriller he co-authored with his late wife Maria Nieves Edmonds, received a Royal Palm Literary Award from the Florida Writers' Association and a first-place International Latino Book Award for fiction. His latest novel, The Heretic of  Granada, has also won a Royal Palm Literary Award.
Thank you, Jackie Minniti, for giving Florida writers the opportunity to showcase our works on your “Fabulous Florida Writers” Blog. I’m honored to be in such illustrious company.
I’m also happy to announce that my latest book, The Heretic of Granada, is finally available. I started it several years ago as a spin-off from The Girl in the Glyphs, an archaeological thriller about a Smithsonian specialist in Mayan writing who goes to Nicaragua in search of a mysterious “glyph” cave.

Heretic was delayed, sadly, by the illness and subsequent passing of my beautiful wife, Maria.

The publisher is Southern Yellow Pine Publishing (SYP), a small press in Tallahassee that promotes Southern authors of fiction and non-fiction throughout the southeast. I was on the verge of signing with a much larger publishing house in New York until I received the SYP offer. The clincher was their line-up of talented authors. Almost all have received prestigious literary awards.

Heretic is my third award-winning thriller set in Latin America and/or the Caribbean. Unlike the others, Lily of Peru and The Girl in the Glyphs, which were either based on, or inspired by, my experiences in Latin America, Heretic is set in the days of the Spanish Inquisition and Caribbean piracy. No, I wasn’t alive back then, though I did spend considerable time in all the colonial settings—Granada (Nicaragua), Cartagena (Colombia), Santo Domingo (Dominican Republic), San Juan (Puerto Rico) and Lake Nicaragua.

The back cover blurb gives a pretty good idea of what the story is about.


He escapes on the day he is to be burned for heresy and is chased across the Spanish Main by the Spanish army, agents of the Inquisition, Caribbean pirates, and even bounty hunters. He’s determined to return to Nicaragua and destroy the evil men who murdered his Indian wife and children, and nothing is going to stop him, not hurricanes, not a Gypsy ghost, and not a brutal war between England and Spain (the War of Jenkin’s Ear).


His quest is further complicated by a young woman named Molly, who he saves from the pirates. But Molly has a secret, like a chest of stolen treasure and the Englishman who loves her. The pirates want her back. So does the Englishman. Father Antonio isn’t about to give her up. He’s in love, and the chase continues…


I’m often asked how it was that a Jesuit priest like Father Antonio, who took a vow of celibacy, had a native wife and children. It wasn’t that unusual in colonial days. Priests were stuck for years in remote places and often cohabited with the locals. I’ve been in jungle villages where a number of the bare-footed kids looked just like the padre.


Another frequent question is where I got the idea for a priest on the run from the Inquisition. Part of the answer is that when I worked in Nicaragua in the early 1990s I often stayed at the Hotel Alhambra in the beautiful colonial city of Granada. The hotel was a government building in colonial times and also housed condemned prisoners. It faces the plaza where zealots destroyed native idols of worship and where heretics, pirates and criminals came to an unpleasant end. It was also the scene of bloody fighting in Nicaragua’s civil war and was still scarred and pocked in the early 90s. Several chapters in both The Girl in the Glyphs (1990s) and The Heretic of Granada (1740s) are set at that location.


The other source of inspiration came from my participation in an expedition to locate a jungle cave that had once been a Mayan jade mine and a hideout for Sandinista soldiers. It may sound romantic, but it was not. My memories center mostly around jungle foliage, rain, sweltering heat, hostile natives, mosquitoes, snakes, narrow trails, a nasty stinging nettles plant called chichicaste, and a constant fear of attack from militants with machetes and AK-47s.


When I related the story to Maria, who would later become my wife, she encouraged me to write a fictionalized version, but with a female lead character. We plotted the story together and came up with The Girl in the Glyphs. In that novel, the lead character, Jennifer, discovers the cave only because of her earlier discovery and translation from the Catalán of Father Antonio’s written account of his adventures. We also changed the location from mountainous jungle to a beautiful tropical island in the middle of Lake Nicaragua. Additionally, Jennifer’s cave—unlike mine—had once been a place of native worship and a burial site for Father Antonio’s purloined pirate gold (all I found was bat guano).


The original title of title of Father Antonio’s manuscript, in the tradition of lengthy descriptive titles of the time, was:


Journal of a Voyage through the Spanish Main


The War of Jenkins Ear


And my Encounters with Hurricanes, Agents of the Holy Church, English Warships, Flame-throwing Zambos, and Spirits of the Underworld, and my Adventures with Pirates of the Caribbean


Jennifer shortened the title to The Heretic of Granada and submitted it to a publisher. Although the story is fiction, the historical backdrop of Caribbean piracy, native uprisings, superstition, colonial rule, the Spanish Inquisition, the hostility between Catalonian and Castilian Spaniards, and the brutal war between England and Spain (the War of Jenkins' Ear) is authentic.


Most of the cathedrals, fortresses, convents, seawalls, and other colonial structures depicted in Heretic are still extant.


Finally, I’d like to end this blog with a thought for my fellow writers.


Most of you are familiar with the saying, “Well-behaved women rarely make history.” The same could be said about lead characters in a novel. There’s not a big audience for a character who’s always logical, rational, never takes chances, never gets into trouble, or does anything dangerous, bold, stupid, or out of the ordinary.


Don’t take my word for it. Think of the great characters of literature and film—Madame Bovary, Scarlett O’Hara, Thelma and Louise, Ana Karenina. Would we care about those characters if they’d followed the rules? Would we be intrigued? Would we even have heard of them?


And how about Father Antonio? If he’d remained a devout priest, doing what priests were supposed to do, he would never have stood up to the fanatics who wanted to destroy a native place of worship. He wouldn’t have been dragged before a court of the Holy Inquisition and sentenced to death by burning. There wouldn’t have been a life-threatening chase across the Caribbean, or entanglement with pirates. No book about him either.


The point is don’t let your characters fall into the well-behaved pit. If you can’t bring yourself to have them do something daring, dangerous or otherwise out of the ordinary, at least plunge them into a difficult situation and let them struggle to get out of it.


Posted by Jackie Minniti at 1:08 PM No comments: