The Soundtrack of a Novel - A Guest Post by Sarah Glenn 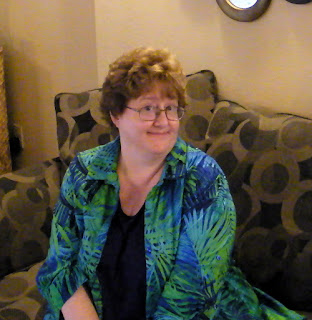 This month, Fabulous Florida Writers is pleased to welcome guest blogger Sarah Glenn. She is the author of  cozy mystery novels and has had stories included in several paranormal and mystery anthologies. Her latest release, Murder at the Million Dollar Pier, is the second book in her Three Snowbirds series. Glenn was our featured writer on December 3, 2018.
My life has a soundtrack, and so do my stories. Nothing helps my mind’s eye focus better than a tune from the time and place of the characters. I’ve written with Dvorak, Debussy, Kitaro, and Alan Parsons (a lot of Alan Parsons) teasing my imagination.

The “Three Snowbirds” series is set in the Roaring Twenties, so I’ve had a lot of fun exploring the music of the era—and the present is the best time to find it! When I began writing my first novel, aka my trunk novel, I had to procure the albums myself or check them out from the library. Today, there are streaming services galore and YouTube channels devoted to popular decades in the first half of the twentieth century.
Spotify, YouTube, and Amazon Music all have selections from the Paul Whiteman Orchestra, a major force during the Twenties. Despite the name, it wasn’t a single orchestra; Whiteman had nearly thirty ensembles performing under his name at one point. One ensemble regularly played the Vinoy Ballroom during the time of Murder at the Million Dollar Pier, so listening to Whiteman while writing was a must. “The Japanese Sandman”, one of the popular songs, has a sweet melody I knew Teddy would love.

For more obscure music, Pax41 Music Time Machine’s YouTube channel is particularly helpful. It provides a broad variety of recordings from the 1900s to the 1940s, grouped by decade, by event (Christmas), and even genre (Broadway showtunes, musical quartets, even the cinema organ!). In one scene of Pier, Teddy plays the WWI song “Goodbye Broadway, Hello France,” and Pax41 led me to it.

Elmer Schoebel, a popular composer in the 1920s, launched his career in Chicago, but in later years moved to Saint Petersburg. I was steered to his music by a co-worker who is one of his descendants. I always try to include a reference to a Schoebel song in our stories. Some of his best-known tunes are “Bugle Call Rag,” “Nobody’s Sweetheart Now,” “Copenhagen,” and “Prince of Wails.” You can find several of the original recordings on YouTube, but if you’d like to hear a more modern rendition, go to Amazon Music. Les Rois du Fox-Trot did a tribute album to Schoebel, and you can stream it.

For more information, visit the author's website at http://www.sarahglenn.com/
or https://www.amazon.com/dp/B07WMN9V79