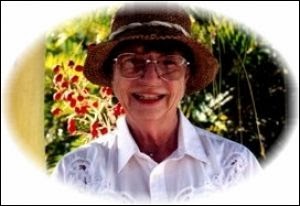 This month, Fabulous Florida Writers is pleased to welcome guest blogger Dorothy Francis. Her works range from a series of animal stories for children to six cozy mystery novels set in Key West. Dorothy was our featured author on June 15, 2011.


Do you remember the first writing you had published?  Most writers do.
Mine went like this:


Jumped  from the tub.  Grabbed for a towel.


I  raced to the door on high.


Looked high and low.  No one was seen.

Least not by the naked I.

I was following the new writer’s rule—write about what you know about.  And it worked.  I knew a little about human nature.


During the years, I’ve taught many writing classes.  One of my themes to my students has been “Write about what you know about." The rule worked for me again when I wrote a short piece of prose for a magazine. I followed my own advice in the following sketch which earned an editor’s acceptance and a small check.


In the 1940s, our Methodist minister in Olathe, Kansas often spoke of the Second Coming.  One Sunday morning, I thought this had actually happened.  A tall man, dressed in spotless summer whites decorated with heavy gold braid on the sleeves and shoulders entered our church and seated himself front and center.  Adults looked at him from the corners of their eyes.  Kids stared openly.  Nothing like this had ever happened in our town.


But no, it wasn’t the Second Coming.  The man was a lieutenant from the new naval air station the federal government had just opened a few miles outside our sleepy village in land-locked Kansas.  I almost burst with excitement .  His family was from Hastings-on-Hudson in New York, and they had moved next door to us.  They had two children, and they needed a babysitter.  Me?


No. Cautious parents didn’t allow their daughters to babysit for strangers. You never knew what those men might do.
Mom and I took Lt. Comfort and his family a heaping box of strawberries from our garden.  They acted as if they had never seen strawberries fresh from a patch before. I wondered where they got strawberries.  Were there no strawberry patches in Hastings-on-Hudson, N.Y.?


“If we have sugar, we usually sugar them down and add cream,” Mom answered.  “But if you have no sugar, they’re delicious right from the box.”


“We have sugar, but we don’t have cream,” Lt. Comfort said.


Mom shook her head.  “No grocery stores are open on Sunday in Kansas.  It’s the law.”


We headed for home.  An hour or so later, Lt. Comfort appeared at our door carrying a cup of sugar and a pint jar of thick cream.  Nobody thought of fat or cholesterol in those days.


“For your strawberries,” he said, offering the gifts to my mother.  “We can get sugar from the commissary on the base, and I found us some cream.”


Mom looked at him wide-eyed.  “Where did you find cream on Sunday?”


He grinned.  "Drove to the air base and revved up my trainer plane.  Just flew around the countryside until I spotted a pasture filled with cattle. I landed the plane, and a farmer came running out, sort of excited.”


Mom’s eyes grew even wider and I could tell she was squelching laughter.


“It was a smooth piece of land.  The farmer said something about scaring his cows, and I apologized.  When I asked for a quart of cream, he just shook his head.  By then his wife had joined us, and she invited us
into their home.  She went to her refrigerator and found some cream for me”
“I don’t believe it!” Mom exclaimed.


“I gave her a few dollars," Lt. Comfort said, “and she seemed real happy about the whole thing.  Farmer’s name is Hoff.”


“You just never know what those men will do,” Mom said.


Later, we did know just what those men would do.  They’d win a war for us.


When my husband and I started spending winters in the Florida Keys, that writing rule worked again for me, and I wrote a series of six mystery novels set in Key West.  I thoroughly enjoyed writing what I was beginning to know about.


The good news for me this year is that those six Key West mysteries have been released as e-books, and they’ll be around for a long time to come.  You can look for them on Amazon Kindle, Barnes & Noble, Untreed Reads Books.  And the 16,000 libraries in the United States may be able to find them via Overdrive.

Sarasota author Don Bruns's writing career had an inauspicious start. “I sent my first story to Alfred Hitchcock Magazine when I was 11,” he says, “and they sent it right back.” So when he won a critique from bestselling author Sue Grafton at a charity auction in 2000, it was déjà vu. “I submitted my manuscript and got back eight pages of criticism,” he recalls. “She even asked me if I’d ever actually read a book.” Bruns was understandably discouraged until Grafton called two days later explaining that she’d been so hard on him because he had the makings of a good writer. She suggested that he attempt a new book. So, with her criticisms in mind, he got to work on a mystery novel titled Jamaica Blue. Grafton liked the manuscript so much that she mentioned it at a national mystery convention, garnering Bruns a contract with St. Martin’s Press. Twelve years and several novels later, Bruns has established himself as one of Florida’s award-winning mystery writers.

Jamaica Blue was the first in Bruns’ “Caribbean Series,” five novels featuring protagonist Mick Sever, an entertainment journalist who explores the seamy underbelly of the music business. Bruns drew from his experience as a singer/songwriter to give the series a gritty realism. “Every book was ripped from the headlines,” Bruns explains.  For example, St. Barts Breakdown, the sequel to Jamaica Blue, was based on music producer Phil Spector, while book three, South Beach Shakedown, was inspired by the career of singer Jackie Wilson.


In 2007, Bruns decided to change course with Stuff to Die For, a comic mystery about two wisecracking underachievers (James Lessor and Skip Moore) who decide to start a moving company and stumble upon a murder. Book List said the novel “…will remind the reader of Tim Dorsey's cast of whacked-out characters but with the narrative voice and feel of Mark Twain's Huck Finn."  Again, Bruns pulled his inspiration from real life. “After graduation, a college buddy and I did a stint as stand-up comics,” he recalls. “Zinging each other was part of the act.”  He describes James and Skip as “wannabe millionaires, full of bravado, who stumble along but always come out on top.”  The enthusiastic response to Lessor and Moore led Bruns to pen a “Stuff” series.
In Stuff Dreams Are Made Of, the boys reinvent themselves as holy rollers when they meet tent revival preacher Reverend Preston Cashdollar. The third book in the series Stuff to Spy For, has James and Skip playing the spy game when they are hired to do surveillance on the president of a security systems company suspected of cheating on his wife. In Don’t Sweat the Small Stuff, the boys finally become licensed private investigators.  To get their fledgling agency, More or Less Investigations, off the ground, they go undercover as carnies to investigate a series of murders in a traveling carnival show.

Too Much Stuff  finds the boys in the Florida Keys searching for gold lost in the 1935 hurricane. The book was scheduled for release to coincide with the 100th anniversary of Henry Flagler’s railroad connection to Key West, something Bruns calls “a defining moment in Florida history.” Inspired by Last Train to Paradise, Les Standiford’s chronicle of Flagler’s railroad,  Bruns wanted Too Much Stuff to be historically accurate.  But there are enough bungles and missteps to keep readers laughing (and guessing) right to the end.

Book number six, Hot Stuff, is a story about the murder of a sous chef in a trendy Miami restaurant.  Bruns researched professional kitchens, actually visiting about 35 all across the country. One of the characters was a pastry chef named Kelley Fields.  Bruns later learned that Chef John Besh in New Orleans has an executive pastry chef named Kelley Fields.  According to Bruns, “I met her and we had a good laugh about her being a murder suspect in the book. I also got a free meal at one of Besh’s restaurants. Not bad!”


The latest book in the series, Reel Stuff, was launched on December 4th.“This is the seventh “Stuff” novel, and the team of James Lessor and Skip Moore still manage to crack me up,” he says. In the story, an A list movie actor dies in a stunt gone wrong on a Miami movie set. Is it suicide or murder? Skip Moore goes cross country, learning more about the movie industry than he wants to when his girlfriend, Emily, goes undercover as a fledgling actress and is offered a major role. “I was reminded of Elmore Leonard’s Get Shorty, about Chili Palmer, a loan shark who goes to Hollywood and within a couple of hours finds himself deep in the movie business,” Bruns says. Bruns was also able to incorporate into the plot some material from a movie pitch he made to Henson Studios several years ago. Book List calls Reel Stuff “A lean, thoroughly entertaining mystery...clues, laughs, and shenanigans abound. The Stuff novels aren’t quite comedy-mysteries, but they’re about as close as you can get, effectively mixing serious crime with plenty of humor.”
Bruns has also penned a stand-alone thriller that is awaiting publication. Peter's Gate is the tale of a nefarious organization that controls the Vatican and makes an attempt on the Pope's life. Bruns calls the book, his longest yet, "non-stop tension that was fun to write." There are also plans for another "Stuff" book. Meanwhile, Bruns will continue to be on the lookout for some strange-but-true inspiration because, as he puts it, "The real stuff is even better than what I can imagine."
Posted by Jackie Minniti at 11:11 AM No comments: