Antonio Simon - Fantasy With A Smile 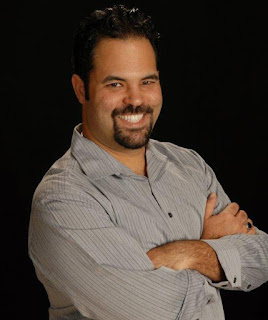 As a lawyer with undergraduate degrees in political science and history, you wouldn’t think Antonio Simon would be voted Most Likely to Become an Award-winning Fantasy Writer. “Fantasy was anathema to what I did in college where everything was fact-based,” he says. “But I had a story to tell, and I needed to tell it.” So tell it he did – in a novel that combines fantasy with laugh-out-loud comedy and takes readers on an adventure they won’t soon forget.

Simon, a native Floridian who grew up in Miami-Dade, read a lot as a child. “I also played a lot of video games that involved role-playing,” he recalls. “They were like interactive books and influenced how I like to write.” After graduating from the University of Miami, he earned his law degree from St. Thomas University School of Law and went on to marry and have two children while working as an attorney.  As busy as he was, the desire to tell stories was “like a fire in my belly that I needed to get out.” So in 2012, he decided to embark on his writing journey. Eighteen months later, he’d completed his first novel.

Set in a fifteenth-century fantasy world, The Gullwing Odyssey is the rollicking tale of Marco, a reluctant hero who accepts an assignment to deliver a letter and finds himself in the center of a series of misadventures that make him responsible for the fate of an entire civilization. “I love the Renaissance as a setting for fiction, with its explosion of new ideas and scientific enlightenment,” Simon says. “It was also a time of adventure and exploration, which was a perfect backdrop for my story.”

He admits that there is a lot of himself in his main character. “I wanted Marco to be a sort of Everyman who’s relatable to everyone,” he explains. “He has a simple job and wants to just keep at it until he can retire. I think there’s a point in everyone’s life where they ask, ‘Is this the best me I’ll ever be? Why should I reach for something better?’ When I was in my mid-twenties, I was asking the same questions.” The thing Simon likes best about the book is the same thing that makes it unique – its humor. According to the Midwest Book Review, “The Gullwing Odyssey rests solidly on the shaking shoulders of a good laugh, and that’s what sets it apart from 90% of fantasies on the market.” The book garnered four literary awards including first places in both the Royal Palm Literary Awards and the Pacific Book Awards.

Since the publication of The Gullwing Odyssey, Simon has published Transit Dreams, a short story collection; Miami is Missing, a history of 30 places in Miami-Dade that changed the world; a role-playing adventure game system (“R.A.G.E.”); and Tarot of Hate, a compendium of stories of murder and revenge.  He also contributed to Forgotten Spaces, a compendium of darkly-themed poetry, and Shadows And Teeth, a horror anthology.

Simon is currently at work on the second of what he hopes will become the Gullwing Series. Tentatively titled The Gullwing Colony, the story picks up where The Gullwing Odyssey left off. “Much of the humor this time will be about what happens when people of different cultures who know nothing of each other are suddenly thrust together,” he says.  Simon hopes his humorous fantasies will give readers some belly laughs while delivering a more serious message.  “Sometimes you’re called upon to be much more than you think you are,” he says. “You may not see your potential, but it’s there, so reach for the heights instead of shying away from them.”

For more information, visit the publisher’s website at www.darkwatersyndicate.com.
Posted by Jackie Minniti at 1:39 PM No comments: 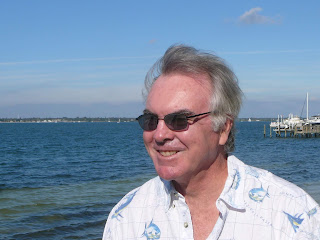 Sandy Mason is an avid sailor who loves to travel. After this former Long Island software engineer retired, he decided to reinvent himself as a novelist and has drawn on his two passions to pen the Johnny Donohue Adventures - a series of novels that take readers on page-turning voyages sure to thrill mystery buffs.

Mason moved to Florida 20 years ago because of a job transfer. He spent some time commuting between St. Petersburg and Washington, DC before deciding to retire and take up writing. “I was always interested in writing,” he says. “I secretly wrote short stories for years, but I never showed them to anybody. And I always loved books and literature, so I thought I’d try my hand at it.”

His first novel, Storm Damage, introduces Johnny Donohue, a man who leaves the high tech corporate world to move to the west coast of Florida. Mason admits that he has a lot in common with his signature character.  “Growing up, I always wanted to be a detective,” he says. “Now I can be.” But he is quick to point out that Johnny can do things he’d never be able to do.  For example, in Storm Damage, Johnny is drawn into investigating the death of his best friend’s wife in a mystery that takes him from New York’s Westhampton Beach to the Florida coast.

The next book in the series, Man Overboard, has Johnny following a trail of money laundering, stolen boats, drug smuggling and kidnapping to find an experienced sailor that has gone missing at sea. In Sailor Take Warning, the third Johnny Donohue Adventure, Johnny enlists the help of his friend and former police officer, Lonnie Turner, to investigate the murder of a St. Petersburg tour boat captain that leads them into the seamy world of Tampa’s strip clubs.

While his first three novels were straight mysteries, Mason decided to try “something a bit deeper” in book four. “Since I’ve always been interested in history, I decided to include a historical element in the story,” he explains. The result was Havana Moon, a novel based on his grandfather’s experiences in the Spanish American War. The story has Johnny trying to untangle clues leading to the death of a local marine electronics expert after discovering a Spanish American War artifact that has international consequences.

Mason continued the history-mystery connection in his next two novels. In “Silver Voyage,” the death of William Haggerty, a family friend, sends Johnny digging into the story of Alan Turing, the British mathematician who deciphered the German Enigma Machine in WWII. “William lived in my neighborhood in New York,” Mason says. “He assisted Turing in tracking down the Nazi codes and developed the trigger mechanism for the atomic bomb. I’m still friends with his daughter.”

Mason’s next release, Cuban Exile, has Johnny and Lonnie sailing to Cuba to deliver a sailboat to Doctors Without Borders. When Johnny becomes a suspect in the murder of a Russian physician, his efforts to prove his innocence lead him back to the Cuban Missile Crisis and Vasili Alexandrovich Arkhipov,  the Russian naval officer who may have saved the world from nuclear annihilation. “JFK was my boyhood hero,” Mason says. “I followed his administration closely and wanted to write about him. Some people have bad impressions of him, but he kept us out of war.”

In 2018, Mason published a follow-up novel to Cuban Exile titled Global Position. Johnny Donohue returns to track down the players in an international money laundering ring. Johnny responds to the scene of a fatal boating accident which ultimately leads him and Lonnie to the principal players of an illegal crime syndicate. Johnny’s checkered past makes him a suspect in the police investigation to uncover the true cause of the crash. He is hounded by law enforcement and threatened by unruly reporters who spout half truths about his past life.  Johnny’s knowledge of navigation equipment, as well as his uncanny feel for the waterways that define his life, lead him through a confusing maze of clues while eluding attempts on his own life.

Mason’s next novel, Killer Tide, is a story of greed, corruption and murder surrounding Florida’s fight with red tide. It is scheduled for release in May, 2020. “The thing I enjoy most about writing is the sense of accomplishment when I’ve gotten an idea on paper and know someone else will look at it,” Mason says. He hopes readers will enjoy watching his characters evolve and become better people as they sail into more intricate crimes.

For more information, visit the author’s Amazon author page at amazon.com/author/sandymason or his website at www.sandymason.com.
Posted by Jackie Minniti at 10:08 AM No comments: