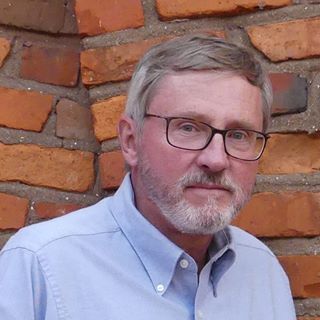 “Medicine was my first love, but mysteries and poetry became my drugs of choice,” says St. Petersburg writer John Vanek. Although he spent his professional career as a physician, he now spends his time living “happily as an ink-stained wretch” penning mysteries that combine medicine, religion, and spirituality.

Vanek first discovered his passion for writing while he was a student at Case Western University, but it wasn’t until he had earned his medical degree from the University of Rochester that he began to delve into the nuts and bolts of the craft. “I began honing my skills in creative writing workshops and college courses and was gratified when my early work won contests and was published widely,” he says. His writing has appeared in numerous literary journals, anthologies, Chicken Soup for the Soul, and Stories of Strength, and in 2009, he published a collection of his poetry titled Heart Murmurs: Poems.

In 2018, Vanek published the first of what would become a series of mystery novels featuring an unusual protagonist. Deros, the story of a series of murders that occur after a high school reunion, introduces Father Jake Austin, a physician and Vietnam veteran who entered the seminary after the war and became a priest. “Although Father Jake Austin is a fictional character, aspects of his personality and struggles are modeled after two Catholic priests who became my close friends and confidants while I was practicing at a Catholic hospital,” Vanek explains. “When I first met them, I expected the usual stereotypes, but when their Roman collars came off, I found that they were simply human. I portray Father Jake as a spiritual man, but as realistically and human as possible.” Publisher’s Weekly described Deros as “…a mystery that’s as much a character study as a whodunit …. Readers will look forward to seeing more of Jake.”

Miracles, the sequel to Deros, follows Father Austin as his life is hurled into a vortex of three storms – a dying nun, a bleeding statue of the Virgin Mary, and an infant in a neonatal intensive care unit. Published in 2019, Miracles was easier for Vanek to write because he was more familiar with his characters’ personalities. N.Y. Times bestselling author Michael Koryta praised Miracles for “bringing the reader into worlds of mystery, medicine, and religion — and the human connections that bridge them all.”

Vanek’s latest release, Absolution, is  Book 3 in the Father Jake Austin mystery series. In the story, Father Austin is forced to decide whether to turn his back on his biological father who deserted him as a child, or turn the other cheek and save his father from a vengeful drug lord, even if it would risk his own life and the lives of his loved ones. “I didn’t struggle at all with the third book because its plot was the logical extension from the first two mysteries,” Vanek says. He is currently finishing the first draft of the fourth book in the series (as yet untitled) involving human trafficking.

Vanek hopes readers will enjoy a protagonist who is out of the ordinary. “It seems as if child molesters, charlatans, and thugs dominate the headlines these days, while those who sacrifice personal needs for the sake of others are seldom thanked, let alone celebrated,” he says.  “Besides spinning a good yarn, I hope to honor all those who pit their will and faith against their human frailties and daily temptations, not just in the clergy or in medicine, but in all walks of life.”